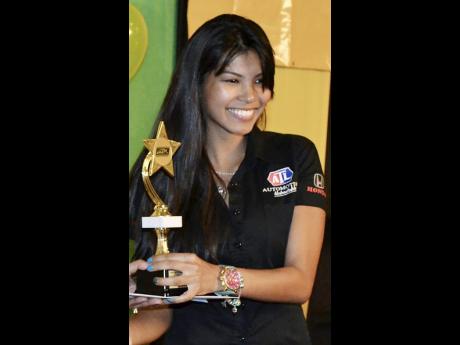 Being a woman in a male-dominated sport can be hard at times. But for Natasha 'Chiney Dolly' Chang, nothing brings as much fun and excitement like beating the life out of her male counterparts on the track at Dover Raceway in St Ann.

"This race meet, I am definitely going to give them hell. I have a nice surprise for them," the pencil-framed racing driver told The Gleaner during yesterday's launch of the Heroes of Speed race meet, which is scheduled to take place on Heroes Day, Monday, October 19. The launch took place at the ATL Volkswagen Showroom on Oxford Road, New Kingston.

Chang, who is perhaps the first woman in the region to drive a rear-wheel Honda 2.2-litre vehicle in a circuit race event, promises to be her usual fiery self.

"My last event was in Trinidad, where I finished second and third, respectively, in two events, competing under wet conditions. The last race meet in Jamaica, I was sick and could not compete. I have recovered since and have been dying to race at Dover," said Chang, who is hoping to take down big guns David Summerbell Jr and Doug Gore in the Thundersport II Class. She wants to finish the year on a high note.

The Jamaica Race Drivers' Club (JRDC) has dubbed the meet Back in the Good Old Days, as it celebrates 25 years of circuit racing in Jamaica. Based on the line-up, the meet promises to be full of non-stop action.

Monique Gibbs, JRDC's club secretary said it will be a family setting and children under 12 will be admitted free.

Besides Chang, mounting tension between arch-rivals Gore and Summerbell seems to be intensifying. Red represents the latter's team and blue is the colour of the former.

"Over the last couple of weeks, I have been campaigning, requesting of fans not to wear any form of red to Dover on Monday. I feel we are going to have a really good meet, the car is very capable, we saw the big improvement at Jam West, and as long as the conditions are good, I think we can erase the track record," said a jovial Gore, who drives an Audi and was decked out in a bright blue shirt at yesterday's launch.

He added: "I also understand that Summerbell has done some fantastic stuff to his car, so we are in for an intense battle."

Meantime, Summerbell is not taking anything for granted. At Jam West in August, Gore drew first blood by dominating that meet. Now, Summerbell will be looking to turn the tables at Dover, which is said to be more friendly and accommodating to his Stewart's Auto/Total Lubricant-sponsored Mitsubishi Evolution 8.

"Last weekend, we went down and tested the car. There are still some little things to tighten up, but the car is in good shape I feel very comfortable with where we are now. We are coming to give of our best and the aim is to win all three races in the Thundersport II Class," said Summerbell.