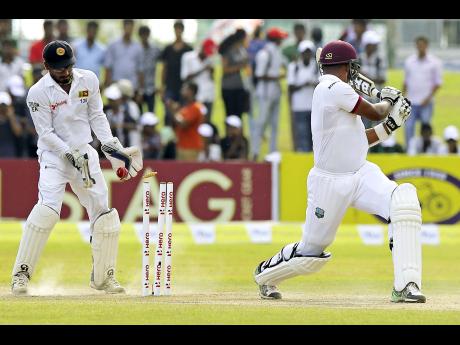 The humiliating innings defeat in the first Test by Sri Lanka over the West Indies inside four days, came as no real surprise.

The team of cricketers sent overseas by the West Indies Cricket Board (WICB) have been so discombobulated by strange and inexplicable decisions, that to even draw a game not affected by the weather would have been hailed as a 'wonderful result'.

The team is playing without confidence. Confidence comes from being prepared. The lack of preparation is not the players' fault.

The administrators of West Indies cricket ensured that the team was eliminated from international competition by a series of mishaps that began with the president's stubborn refusal to meet with disgruntled players in India, who were sent on a tour without a signed contract, and when the contract was delivered, (and found to be different from what was negotiated) tried, in vain, to fire the entire team and replace them with a second 11.

Following that disaster, there was intervention by island leaders in the dispute with the players. These heads of governments recognised the injustice and elicited a promise of no victimisation from the complicit WICB.

The wily board members then arranged a merger with the players' union, and proceeded to victimise the organisers of the Indian tour walkout. The players responded by withdrawing their membership from the union.

The tit-for-tat continued like preschoolers on a playground. The team's most reliable and consistent batsman was unceremoniously dropped. Then the coach was 'suspended' for complaining of outside interference, which every West Indian knows occurs.

Next, one of those accused of succumbing to outside interference accepts the position of coach, with absolutely no history of coaching experience in the region. The team leaves the islands with two of the youngest and most inexperienced members of the squad as captain and vice captain, with no fielding coach.

So, what happens in the first Test? Five potential catches were dropped, a key run-out opportunity missed, and our best batsman, who averages 9.85 in Tests against Sri Lanka, is out first ball in the second innings and wastes a review by contesting a leg-before decision when his back leg was hit plumb in front of the middle stump.

What is the answer? First, the West Indian people must insist in the wholesale removal of the West Indies Cricket Board.

The sponsors must be the target of our displeasure as no pleadings from Caribbean leaders or past players will do.

The sponsors must be made to feel the pain of product boycott.

Second, the contractual arrangements re the present tour(s) will have to be honoured. But, after the last contractual match, we should withdraw from Test cricket for two years while we regroup and refit the administration of cricket in the region.

We should continue to play T20 and one-day internationals with the understanding that the coach (whoever he/she may be) has full control over squads selected by a competent set of selectors, who have no aspirations of 'eating a food' by usurping the paid positions of officials on tours.

The longer we take to implement these suggestions, the longer we will suffer humiliation after humiliation as the better teams find ways to marginalise us and reduce the number of games that they are forced to play against us. West Indies cricket can be saved. Are we man enough to save it?