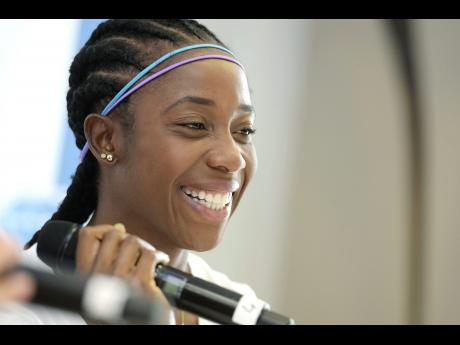 It was some Public Holiday night in 2008 - National Heroes Day appropriately springs to mind - that this columnist paid a visit to the Waterhouse community of St Andrew.

It was a period of personal vehicular immobility, a favourite taxi driver providing the transport. There was no arrangement for the return trip home, that was left to chance. Prime focus was to absorb the prelude to a function, at which the recently crowned Olympic 100m champion and daughter of the area, Shelly-Ann Fraser (no Pryce yet) would be feted.

Given the tradition, a speech was expected. To be there in the first instance some would call it ‘’temporary insanity”.

Before the arrival of the queen of the evening, there was interaction with the crowd. The air was full of ‘’me an she went to basic school together”, “Is mi little niece and she neva run fast like mi,” and numerous other little quips, all aimed at showing some affiliation to the toast of the moment.

There were vendors galore, both at the venue, Ashoka Road and drawn from places beyond. Business was robust, street party-styled.

When time came for the night’s proceedings to begin, all being asked was “When she going to talk?”

When that special moment arrived, the cheers were deafening. Queen Shelly was on centre stage. Her upbringing flashed across the mind. So too, did live television clips of ‘Mommy Maxine’ after that fantastic Beijing triumph taking to the church to rock and sing praises with her equally enthralled brethren and sistren.

Shelly spoke of support for the community from which she launched her moment of global glory, still to be further embellished in the ensuing years. As guns barked close by, the casualties to be catalogued in the next morning’s news, she had a message to the idle perpetrators: “I will get to you, in time.”

For Foster’s Fairplay’s candidate for Jamaica’s finest female sporting ambassador of all times, the time is now.

As reported, Shelly has launched the third staging of what is to be an annual Six-a-Side football competition in her home environment. She issued a passion-filled call to neighbouring businesses to give their support, emphasising that the competition has dismantled a lot of the tensions that existed among warring factions.

Plans of this Shelly-Ann initiative include infrastructural upgrade at a facility sited at 451 Spanish Town Road, transforming it into a sporting complex.

She has welcomed on board the sponsors, who have already signalled their support.
“I am really excited to have them … for them to see the impact this football competition has had on the community."

She wanted, as well, to have medical personnel present at all games, which she deemed to be mandatory.

The two-time Olympic 100m gold medallist - a feat accomplished by only two athletes previously - recounted a sad incident. It made the reason for her community upliftment plans even more relevant.

“I remember years ago when I lived in the community, men were in argument over football and one person ended up dying. It's a good thing when you can have young men from different parts of the community come together and play some football and when they are done they can lyme and talk and go about their business."

What is happening with this on-going competition is to be commended.

It shows a young woman’s resolve to enforce a thought that could have perished like so many others from the less committed.

Shelly has put as a priority the welfare of her disadvantaged people, raising their hopes and belief that they have not been forgotten and left to languish in the dark corridors of empty promises. This is a stark demonstration that there is something out there for them.

Let the nation wake up and appreciate that in their midst that there is a rare gem in Shelly-Ann Fraser-Pryce.

Jamaica needs noble and selfless acts like these for our future stars to emulate.

Foster’s Fairplay, always seeking to extend plaudits to the deserving, is in ecstacy with her displays of benevolence.

Shelly is one of a kind.