Graham for Coach of the Year? 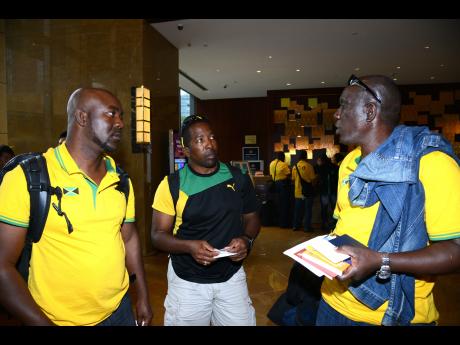 Coming from a respected practitioner in the discipline, Tuesday, November 10 is Coaches Day. Foster's Fairplay will not contest the revelation, given that it fits squarely in a plan, conceptualised post-Beijing World Championships.

No less a person than Jamaica's technical leader to Beijing, Maurice Wilson, has made a powerful call. The G.C. Foster College of Physical Education & Sport's track and field boss and former Holmwood Technical High School long-serving title-winning coach has cited Lennox Graham for the title Coach of the Year.

Graham has exported himself to the USA collegiate system and continues his life's trade out of the Johnson C. Smith University (JCSU), a predominantly black institution in the belly of Charlotte, North Carolina.

Given his ambitions, he might well have something even more stunning to roll out, but, to date, his athlete Danielle Williams' surprise golden success in Beijing, sits supreme

Wilson's choice may not be cast in concrete, but it is embraced and endorsed by this columnist.

Graham, who once coached purple-clad athletes, is now in charge of a team where navy blue and white stand out - a point to be noted.

Foster's Fairplay wanted to hear, not necessarily about that statistic which explains itself, but his Beijing experience.

He explains: "This was my third assignment as coach on a World Championships team, previously assigned in Daegu (2011) and Moscow (2013). The experiences were awesome, as I consider it a honour to serve one's country in any capacity.

"Prior to my first call, it was never an expectation. It was more staying in a state of readiness. I was more focused on producing athletes who could compete well at the highest level."

About the Williams phenomenon in Beijing: "Danielle's performance was definitely phenomenal. I firmly believe that God knows the end before the beginning, and all we have to do is have faith supported by actions.

"The 100m hurdles field was very strong and we did not set our eyes on a final position. We wanted to make it to the final and get a personal best. The hope was that that approach would keep the focus in our lane and nowhere else."

What made the Queen's School graduate so special?

"Danielle is a very willing athlete. She is a fierce competitor and she loves to race and to win. She is not similarly motivated at the thought of practice. From the beginning of the season, we agreed on the technical improvements that were necessary and so it was not difficult to gain buy-in. We had struggles like all other relationships, but I refused to let her quit or become mentally defeated."

Concerning his choice of overseas extension to his role in the sport and the ensuing challenges, Graham said: "I was blessed to be given an opportunity at Johnson C. Smith University to touch young lives in a positive way.

"I wanted to continue what I started as a coach at Kingston College and Convent of Mercy Alpha, assisting young men/women achieve their career goals, utilising their God-given talents. JCSU was looking for a coach in 2007 and I interviewed on their campus and loved it. The facilities were great and underutilised, [there was] no recent top-level success in track and field and they needed a head coach. I interviewed with then President Dr Dorothy Cowser-Yancy and was very impressed with her demeanour and her vision."

With regard to recruitment strategy, given the current thrust to professionalism, he opined: "I am able to recruit Jamaican talent, but it is adversely affected by the number of students who are trying to be part of the local club system. Of course, there is also the school of thought that student athletes are overworked and burnt out in all colleges in the USA collegiate system. I will not join a debate on that subject, but prefer to just keep working positively with the student athletes that come under my influence.''