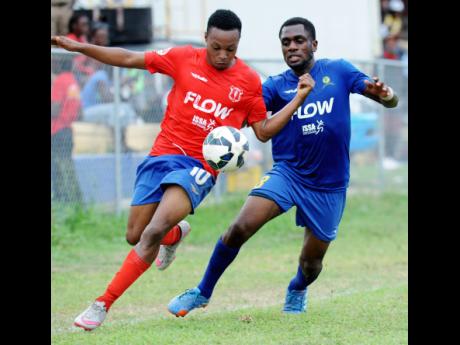 The fallen former champions are Calabar, Charlie Smith and Excelsior in Group K, along with Camperdown from Group I.

Coach Omar Edwards was proud of his history-making Denham Town team, despite being lashed 4-1 by Camperdown at the Constant Spring field yesterday.

Camperdown's scorers were Kevin Clarke, who led with a 26th- and 64th-minute brace, while Aruna Anderson struck in the 49th and Tajae Brown rounded out the scoring in stoppage time (90+2).

Daquan Black scored the consolation for Denham Town, who might have some injury concerns ahead of the semi-finals, with defender Arthur Walters stretchered off with a head injury.

The result was one of academic interest as the west Kingston-based school had already qualified on six points, courtesy of a 1-0 win over Innswood High and Hydel's lost three points for fielding an ineligible player against them.

Hydel had won 3-0 but ISSA reversed the decision, handing the points to Denham Town.

"We have advanced to the semi-finals, the first time in the history of the school. This is my first year with them. The players don't fully buy into the concept as yet, but we have time on our hands," he told The Gleaner.

"We have to get the players sharp and focused for the semi-finals because that is really the big one. We did not even start this game with our best 11, but gave others starts to see what they would look like in the semi-finals,'' Edwards added.

Ronaldo McDonald scored in the 29th and 87th minutes, while Kemar Jones netted in the 35th, with Zamario Sinclair scoring in minute 59.

Meanwhile, at Prison Oval, Jonathan Grant held on for a 2-2 draw with Calabar High to book their passage to the last four in yesterday's 1 p.m. curtain-raiser.

Hydel clipped Innswood 4-3 in the later game at the same venue.