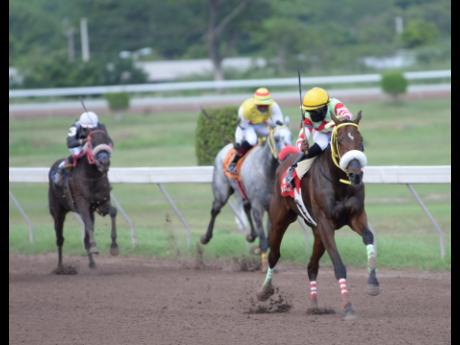 Jermaine Barnaby
Jockey Shamaree Muir takes a look behind as he romps to victory aboard SPORTING CLAY in the ALLOWANCE IV (NB 4 Y-O & UP NW3) race at Caymanas Park on Saturday November 7, 2015.

The day's showpiece event, the 37th running of the mile and a quarter Burger King Superstakes, with a purse of $4.5 million, has attracted nine starters, including two-time winner TYPEWRITER with big-race jockey Shane Ellis riding for trainer Spencer Chung, and his arch rival, the recent Gold Cup winner PERFECT NEIGHBOUR, will again be ridden by title-chasing jockey Robert Halledeen for 14-time champion trainer Wayne DaCosta.

MEET JUSTIN, who caught the eye last Saturday when finishing 23/4 lengths fourth (closing strongly) to TASHIE BABY over 1200 metres, should win the first Super-6 race (second on the card) over 1500 metres. The three-year-old colt from the stables of Patrick Lynch should relish the longer distance, and with outgoing champion Dane Nelson returning from a stint in Canada to ride him, MEET JUSTIN will not be easily denied in a field of 11.

ZUGULU, who impressed when winning on his only start some weeks ago, looks hard to oppose under leading jockey Shane Ellis in the third race, the $1 million Coca Cola Juvenile Sprint over 1300 metres, to be contested by seven two-year-olds. ZUGULU is trained by Richard Azan.

SERIOUS BUSINESS, to be ridden by the crack 3.kg claiming apprentice Linton Steadman for trainer Robert Darby Sr, gets the nod over JARREAU and I'M ALL WRIGHT in the third Pick-6 race over 1400 metres for $180,000 claimers.

In the following race, the highly thought of first-time runner, SIMPLY THE BEST, a bay filly by Adore The Gold out of Supa Lei, with Ian Spence riding for Hall of Fame Trainer Philip Feanhy, has been working like a machine at exercise (bullet work after bullet work) and looks a five-star banker. And it should be this year's derby winner, SEEKING MY DREAM (working exceptionally well), with Halledeen aboard, over stable-companion ALI BABA in the seventh, the $1.25 million Coca Cola Invitational Mile in which nine have been declared.