Boyz desperate for victory in World Cup Qualifier against Haiti 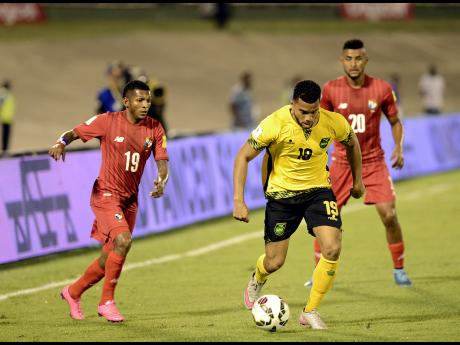 Jamaica's Adrian Mariappa (centre) breaks away from Panama's Anibal Godoy of Panama during the CONCACAF Semi-final round Group B World Cup Qualifying football match at the National Stadium on Friday. Panama won 2-0.

JAMAICA'S REGGAE BOYZ and the team they will tackle today, Haiti, are under pressure to rebound with a victory, when they clash in their second Group B match of the CONCACAF Semi-final World Cup Qualifying competition in Port-au-Prince, beginning at 6 p.m.

Both countries lost their opening match when the qualifiers got under way on Friday, Haiti 0-1 in Costa Rica and Jamaica worse off through the 0-2 margin of defeat, and the fact that it was their home fixture, which they surrendered at the National Stadium to Panama.

Only two will qualify from this round-robin phase of six matches, three at home and three away, and by virtue of Friday's results, Panama and Costa Rica lead jointly with three points, while Jamaica and Haiti are yet to get off the mark.

"... Going to Haiti, we know that it's a must-win," said assistant coach Miguel Coley who led the team in the absence of head coach Winfried Sch‰fer last Friday. "It's a tough group, and we have to do good and win."

Sch‰fer will return to the bench, having served a one-match FIFA ban owing to a verbal spat with match officials after the 2-0 win in Nicaragua, and his strong and measured guidance will be necessary.

His players must improve big time on Friday's non-performance if they are to win. They were very stagnant in the first half and could not build offensives from the back to get the ball to the forwards for practically the entire 45 minutes. Thus, Darren Mattocks, the team's number-one striker, who had scored four goals in the previous four matches, and his striker partner, Giles Barnes, were starved.

Mattocks actually got the ball in the net once, only to be flagged for offside. Given his excellent form, it was surprising that he was the first player substituted by the Jamaica coaching staff, early in the second half.

Another big surprise was the non-selection of Simon Dawkins, who scored a last-minute goal against Nicaragua to save Jamaica from WCQ elimination in the last round.

Dawkins has been playing as a starting player or first-change for every match at the prep tournaments for the WCQ - Copa America and the CONCACAF Gold Cup - and even before. Additionally, he is one of the best link-up players in the Jamaica squad, apart from Joel Grant, whose talent has not been rewarded with playing time and even selection for these first two WCQs.

Two players who haven't been part of the Jamaica squad, Dever Orgill for years, and Clayton Donaldson for the first time ever, were among three substitutes used. The other was defender Alvas Powell, in an attacking role.

Dawkins reportedly left the Jamaica squad ahead of the squad game and headed back to his club in Britain.

Haiti is almost on a similar playing level as Panama. The big difference is their finishing, as the French-speaking Caribbean country's players are not good at scoring. But they are very skilful, full of running and combination plays and will prove to be a handful for Jamaica, especially as they are playing at home and also desperate.

Jamaica must show some fight, which was lacking on Friday night, and defend well if they are to win this tough game.

It has also been reported that captain Rodolph Austin and Barnes will not play on the artificial surface in Port-au-Prince as a medical precaution, given their knee issues, making the task that much more difficult for the Jamaicans.

The goalkeeper has a role to play, too. Duwayne Kerr was at fault for one Panama goal. Andre Blake and Ryan Thompson are at hand.