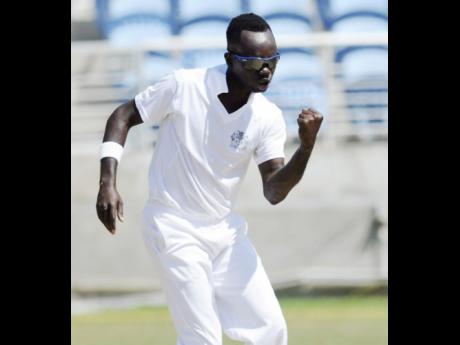 Spinner Nikita Miller has labelled his Man of the Match effort as decent after piloting Jamaica Scorpions to a 30-run win over Windward Islands Volcanoes in WICB First-Class Championship action at Sabina Park on Sunday.

Miller claimed an impressive five for 46 for an overall match haul of nine for 113, as the Windwards, set 176 to win, were bowled out for 145.

"It was a decent effort," he said after the pulsating contest, which ended late on the third day and saw the Windwards capitulate from the position of strength at 126 for four.

"I was asked to do a job by my skipper, which was to maintain discipline, slow down the run rate and pick up wickets.

"That, I was able to do, and for that I am really happy, as we were on the back foot for the most," he noted.

Jamaica, who made 259 in their first innings, found themselves having to play catch-up after being dismissed for 128 in their second innings. That position could have easily been worse had they not recovered from a disastrous state of 25 for seven.

Having fought their way back into the contest, the Windwards, who were dismissed for 212 in their first innings, found Miller hard to handle once again. Bowling his trademark nagging off-stump line with several variations in flight and pace on a wearing pitch, the 33-year-old was able to induce several false shots, which led to the demise of the visitors.

He was also aided by some spectacular catches, one of which came from fast bowler Jason Dawes. Running around from wide long-off, Dawes leapt high to take a one-handed catch, which caused the dismissal of the dangerous Sunil Ambris next to the boundary rope.

The dislodgement was crucial, as it broke a threatening third-wicket stand of 63 between Ambris, who hit 40, their second-highest score, and opener Devon Smith, who went on to make an innings-high 50.

Miller, with 13 wickets from two matches, four behind leader Shane Shillingford of the Windwards, said he was looking to finish high up on the bowling list.

"I always look to get most wickets in whatever tournament I'm playing," he said. "However, first of all, my focus is to get wickets for the team and help us win. If I am at the top of the bowling charts after that, then that is also great."

The Scorpions, who were recording their first win from two matches, are scheduled to depart the country tomorrow for Trinidad and Tobago, against whom they will play their third game in the 10-match round-robin tournament.