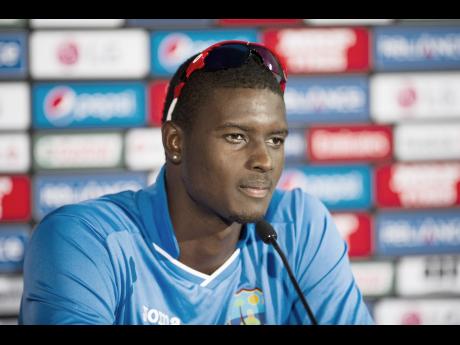 West Indies were staring at a humiliating innings defeat in the face after an all-too-familiar second-innings batting collapse left them hanging by a thread, on the penultimate day of their four-day tour match against a youthful Cricket Australia XI here yesterday.

Trailing by 201 on first innings after watching the hosts convert their overnight 245 for four into 444 all out at the Allan Border Field, West Indies slumped to 125 for seven at the close, still requiring a further 76 runs to avoid a demoralising defeat.

Captain Jason Holder was unbeaten on 26 and partnered by tail-ender Kemar Roach on nine, with only Devendra Bishoo and Shannon Gabriel to come.

Carlos Brathwaite has so far top-scored with a robust 31,

batting at number eight, while opener Rajindra Chandrika and the experienced Marlon Samuels both scored 21.

Of the top six, they were the only ones to make it past 15 as two debutant seamers, Ryan Lees and James Bazley, ripped through the West Indies top order to leave the innings in tatters at 59 for six.

The 21-year-old Lees finished with three for 37 and Bazley, only 20, claimed two for 39, while leg-spinner Cameron Boyce picked up two for 56.

The display will be worrying for West Indies ahead of next week's first Test, especially coming against a side fielding six players on first-class debut.

They were in trouble from as early as the fourth ball of the innings when Kraigg Brathwaite perished without scoring, caught at point by Bazley off Lees, without a run on the board.

Left-hander Darren Bravo followed soon afterward for five, nicking a defensive prod at Bazley behind, to leave the tourists on seven for two.

Chandrika, who faced 47 balls and struck two fours, then repaired the innings somewhat in a 29-run, third-wicket stand with Samuels who faced 53 deliveries and also counted two fours.

Bazley, however, removed Chandrika to a catch in the slips by substitute Tim Paine and with a run added in the next over, Lees removed Jermaine Blackwood without scoring to a catch at the wicket, as the Windies tumbled to 37 for four.