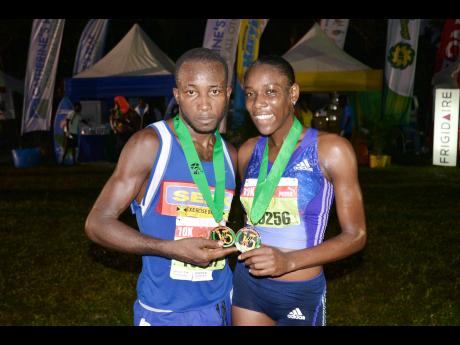 Jamaicans and overseas runners shared the spotlight in the 15th Reggae Marathon, Half Marathon and 10K held yesterday in Negril, Westmoreland.

In what was the best supported staging of the event, the excitement and anticipation was high as more than 2,500 runners dashed across the starting line at the Long Bay Beach Park where locals walked away with three top spots while their overseas counterparts copped the remaining three top titles.

"It feels great to come back and take the title, I really love this," a winded Graham told the Sunday Gleaner following his big win.

The farmer gave his formula for success as nothing more than eating right, complemented by training hard in the hills of his home parish of St Mary. He even boasted that he won despite putting in less training than he did in previous years, noting that this is a testament to his passion for athletics.

"This is my third year. The first time I came in third, while for my second and third year I am first so it's job well done," he stated, adding that he will be back for the title next year.

The first female home in the 10K was Danielle James. She clocked 39:51. James credited her success to some intense training at G.C. Foster College where she is also currently pursuing a two-year coaching course.

"The first time I came here, I came in second. The second time I was third and now I am first so I'm feeling pretty good," said James.

The Half Marathon male and female winners were Jamaica's Kirk Brown and Canadian Heather Colasuomno.