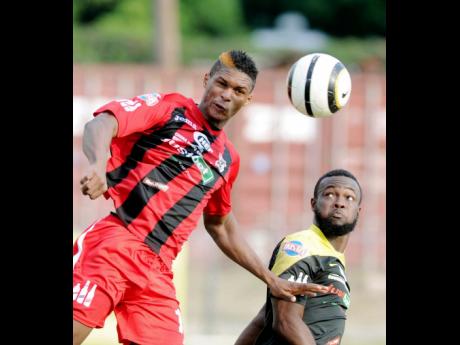 Reggae Boyz striker AndrÈ Clennon is set to depart the island this week to take up a three-year contract with Finnish club VPS.

The 25-year-old former Waterhouse and Lam Dong (Vietnam) player recently agreed to the deal after impressing while on a two-month loan from defending Red Stripe Premier League (RSPL) champions Arnett Gardens at the end of last season.

"I should leave any time next week. I recently re-signed a three-year contract team with VPS," the former Bridgeport High School star told The Gleaner.

Unlike the first time he went to VPS, this time, Clennon will head to the club alone.

"Initially, when I was there the first time, it was both me and Hughan Gray who went, but now, I am going back alone. There will, however, be another Jamaican there as Steven Morrissey, who played for Portmore United, is with the club," Clennon said.

The striker, who earned a recall to the national squad after playing an integral role in Arnett Gardens winning last season's RSPL title and who was part of Jamaica's squad that competed in the country's first ever Copa AmÈrica tournament and best-ever finish in the Gold Cup last summer, said the opportunity was a result of hard work.

"I went on a two-month loan last season, and I think I did well playing six games, scoring four goals and helping my team to avoid relegation. We finished ninth in the 12-club league, and this is in the top league in Finland," the Portmore resident said.

Clennon said the type of football played in Finland is tailor-made for his style of play.

"The type of football there is very competitive. It has good-quality players, some of whom would have played in the German Bundesliga and came back to play there, so it is a good place to be and to play football. It is typical European football played with a lot of speed and very physical and it suits me.

"It is pretty cold there, but you have to get used to it because in international football today, you cannot get rid of that, and once you are going to that side of the world, you just have to prepare yourself and mind to just go out there and work," the six-footer said.

While happy with the opportunity and the compensation he will get, Clennon said this would be just the start for him in Europe and European football.

"I am looking to make the best of this, and even though I have signed a three-year contract, I am looking to use this as an opportunity to move to Norway or Sweden after about a year, depending on how well I do," the confident player said.