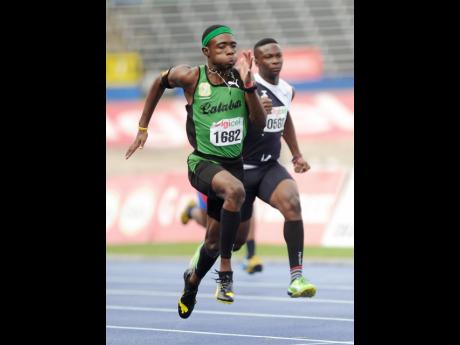 Ricardo Makyn
Calabar High's Christopher Taylor powering to victory in a fast 10.44 seconds in his heat of the Class Two boys 100 metres at yesterday's Camperdown Classic at the National Stadium.

The versatile 16-year-old stopped the clock at 10.44 seconds to take heat nine of the boys' Class Two 100m, with the fastest time overall.

The Camperdown Classic is the final stop in the Corporate Area leg of the 2016 Digicel Grand Prix Athletics Championship. Taylor, the defending Grand Prix 400m champion, is expected to run his pet event at next week's Grand Prix finals at the G.C. Foster College.

Taylor said he was satisfied with yesterday's effort.

"This was just to see how good I was at that event," he told The Sunday Gleaner, while adding that he is fit and ready for more success.

Teammate Tyreke Wilson also clocked a fast time, 10.52, in heat eight for second overall, while another Calabar sprinter, Michael Stephens, cruised to 10.56 in heat eleven for third. Dejour Russell rounded out the top four for Calabar with 10.61 in heat 12.

Stephens also won the Class Two boys' long jump with a leap of 6.64m, while Kymonie Matthews of St George's College and Owayne Owens finished second and third with 6.57m and 6.45m, respectively.

In the eagerly anticipated clubs and institution's men's 400m, former Calabar star Javon Francis of Akan Track Club was fastest overall with 46.21, Javere Bell of Mico University was second in 46.75 ahead of Nathon Allen of St Jago (46.85) while Racers Track Club's Zharnel Hughes finished fourth in 46.95.

Racers sprint stars Warren Weir and Yohan Blake had to settle for seventh and 16th overall in 47.30 and 48.41, respectively.

In the boys' Class One 100m, Xavior Angus of Calabar was first with 10.50 as schoolmate Fabian Hewitt took second overall in 10.54.