Father and daughter at odds over high jump focus 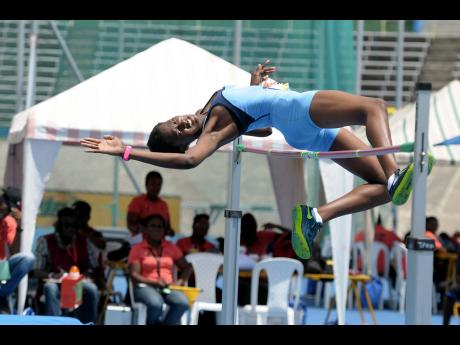 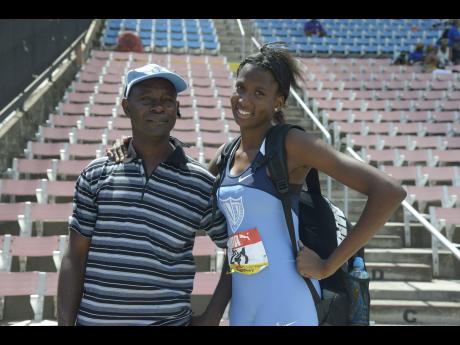 Fifteen-year-old Janique Burgher won gold in the Class Three high jump on yesterday's third day of the Inter-Secondary Schools Sports Association (ISSA)/GraceKennedy Boys and Girls' Athletic Championships to go with the bronze she won in the event in 2014 while competing in Class Four.

Despite the Edwin Allen High School athlete's exploits, her father is not totally satisfied, as his dream is for her to be on the track.

"I am fairly proud, but I think she should doing something (running) on track as well, because I think she has the potential to do it," 60-year-old Hopeton Burgher said.

"I have been trying everything, but she is adamant on doing the high jump, so I just let her have her way."

Young Burgher said she finds running to be boring, hence her decision to stick to the high jump.

"With the high jump I have something that I have to jump over, an obstacle," the slim-built athlete said. However, her father, who represented Holmwood Technical High School in the 100m, 200m and 400m, is not giving up hope of her doing the sprints.

"She is always saying she is going to be the next Shelly-Ann Fraser (Pryce), but I always tell her she can only be in the limelight if she does track," he said. "Persons who are sponsoring they are looking for the hype, so they are not going to sponsor you if they don't get the hype.

"But in time to come I will take it back up with her and take her and make me and her go train. I think she needs to do some sprinting."

Janique was the only athlete in her event to clear 1.70 metres, which earned her the gold medal, with Hydel's Shauntia Davidson taking the silver with her clearance of 1.65m, on the first attempt

Three athletes, Kaliah Jones of Excelsior High, Lacovia High's Kadian Myers and Camperdown High's Ramona Hylton tied for the bronze, as they all cleared 1.65m on their second attempt.

"I am happy to have won the gold medal, but I am a little bit disappointed, because my PR (personal record) is 1.75m. But my groin is hurting me right now and I am having a bellyache," the champion athlete said. "I had to just focus on the event and forget about the pain."