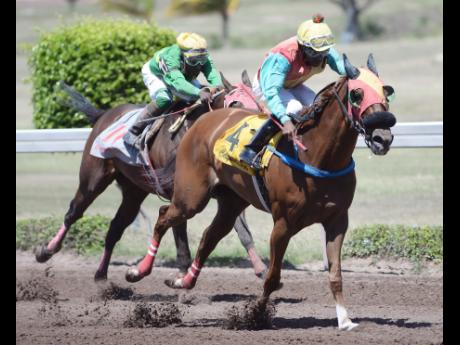 Jermaine Barnaby
Dane Nelson aboard EXPLOSIVE PRINCESS pulling away from RUNNER RUNNER with Dane Dawkins in the saddle to win the Restricted Allowance IV race at Caymanas Park last Saturday.

Also on the annual Jockeys' Guild of Jamaica race day programme are the Jockeys' Guild Trophy race over 1400 metres for four-year-olds and up (non-winners of two) and the annual renewal of the Al Gopie Memorial Cup for maiden four-year-olds and up over the straight-five course, this to perpetuate the memory of the popular lightweight jockey who was killed in a spill in the day's penultimate race on Saturday, November 20, 1999.

Among the six starters declared for the Bonnie Blue Flag Trophy are the progressive American four-year-old filly LONG RUNNING TRAIN, who bids for her third win from her last five starts, and the 2015 Superstakes runner-up HOVER CRAFT, who won decisively over 1500 metres in overnight company last Saturday.

LONG RUNNING TRAIN, however, not only holds a victory over HOVER CRAFT at a mile when last raced on January 23, but another of her opponents, the improving BRAWN, as well.

With the Wayne DaCosta-trained HOVER CRAFT up in class and harshly treated at the weights with topweight of 57.0kg, the race looks a gift for the Harry Parsard-trained LONG RUNNING TRAIN, who, despite winning that open allowance mile on January 23, carries a mere 52.0kg with former champion jockey Wesley Henry again in the saddle.

On that occasion, LONG RUNNING TRAIN beat the likes of CAMPESINO and ALL CORRECT in decisive fashion with HOVER CRAFT in fourth. And before that race she finished two lengths second to top stayer PERFECT NEIGHBOUR in the grade-one Harry Jackson Memorial Cup over 2400 metres last Boxing Day.

Having looked sharp at exercise in preparation for today's race, LONG RUNNING TRAIN looks hard to oppose under these favourable conditions.

Other firm fancies on the card are BATIDOR DE MUNDO to go one better in the second race over a mile, the consistent GOLDEN BULLET In the fifth; PATCH in the seventh and SIR BIGGS in the Jockeys' Guild of Jamaica Trophy to be contested by 12 starters.