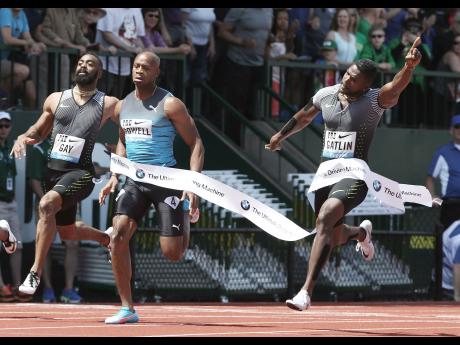 AP
Justin Gatlin (right) wins the men’s 100 metres ahead of (from left) Tyson Gay and Asafa Powell at the Prefontaine Classic track and field meet yesterday in Eugene, Oregon. 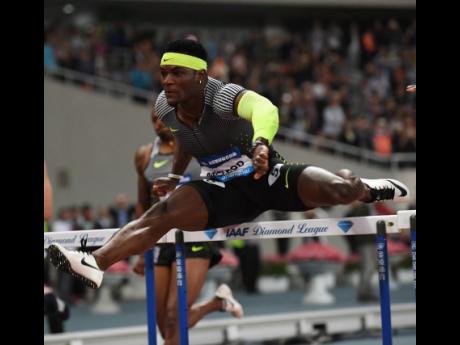 File
Omar McLeod speeding to a 12.98 seconds win in the 110m hurdles at the IAAF Diamond League meet in Shanghai, China.
1
2

Asafa Powell was left fuming after his 100m defeat to Justin Gatlin; American sprint hurdler Kendra Harrison blazed to the second fastest time ever in the 100m hurdles; and Omar McLeod continued to have his way in the men’s variant at the Prefontaine Classic – witnessed by a packed crowd at Hayward Field – in Eugene, Oregon, yesterday.

It wasn’t a glittering performance, but super sprinter ShellyAnn Fraser-Pryce also made her return to competitive action, while Elaine Thompson made her first 200m appearance this season, and Kirani James extended his authority over LaShawn Merritt in the 400m, now finishing ahead of the American in seven of their last nine meetings.

Powell had to put in some work to get back and claim second spot in the men’s 100m in 9.94 seconds, but there was no catching Justin Gatlin, who crossed the line in a wind-aided 9.88 seconds, with Tyson Gay taking third in 9.98.

However, the Jamaican, who was looking for his first win over Gatlin since 2004, was livid after complaining that he could not hear the starter’s gun, an issue that was also raised by Gay and Mike Rodgers, who finished fourth in 9.99.

“The mic wasn’t working, so that threw me off big time. I thought the starter would have stopped the race, but that’s how it goes,” Powell told The Sunday Gleaner.

“I’m very disappointed because I felt good coming here. I am in good shape and I was expecting to come here and run really fast, so it’s disappointing that they allowed Justin (Gatlin) to go away with such a big jump, and he was too far for me to catch him,” added Powell, who joked about what he’d take from his performance here.

“I’m very pleased that I was able to run back very well. That’s a good thing for me, but I’m very disappointed with what happened at the start. What I’d take from this? I would take away the starter’s gun,” he laughed.

McLeod continued to add credence to his status as a serious threat for top honours at the Olympics, with another solid win in the 110m hurdles.

The speedy Jamaican stopped the clock at 13.06 seconds, well ahead of former World Champions David Oliver, 13.38, and Jeff Porter, 13.48 – both from the USA.

Hansle Parchment was eighth in 13.58 and despite seeming to be in some discomfort after the event, his management is reporting that the national record holder is fine.

“This was a good win for me and I am grateful that I could come here and get this result,” McLeod said.

Fraser-Pryce, who is trying to get her season on track after a toe injury that has kept her out of action for several weeks, was just happy to have completed her 100m assignment despite crossing the line in eighth place in 11.18 seconds.

“I really had no expectations. I just wanted to come out and see what’s happening,” she noted.

The event was won by American English Gardner, who was competing at her old college stomping ground, with a time of 10.81 seconds – the second fastest time this season. Second place went to Tianna Bartoletta, 10.94, with Murielle Ahoure, 11.01, finishing third. Jamaican Simone Facey was fourth in 11.09.

American Bowie now has the fastest time in both short sprints so far this year.

The male equivalent was won by Grenadian James, 44.22, after another exciting battle with Merritt, 44.39, with the two coming off the 300m mark stride for stride. Isaac Makwala, 45.37, was third with national record holder, Rusheen McDonald, 46.82, finishing at the back of the field.

The performance of the day was, however, provided by young American Harrison, who stopped the clock in a blistering 12.24 seconds in the 100m hurdles, a time only bettered by the world record 12.21 set back in 1988 by Bulgarian Yordanka Donkova.

Harrison is now the holder of the three fastest times this year in the event.