Thunder star Durant not rushing to decide on future 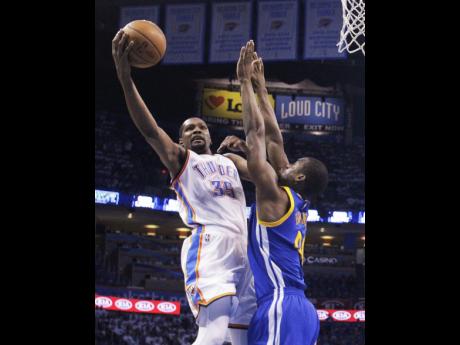 
OKLAHOMA CITY (AP):
Kevin Durant has a lot to consider in the next month.
The face of the Thunder franchise since their move from Seattle in 2008 is heading into free agency and what he chooses to do after July 1 could shake up the NBA landscape.
Durant was the 2014 MVP and is a four-time scoring champion. He led the Thunder to the NBA Finals in 2012 and to the Western Conference Finals in four of the past six years. He recovered from a broken bone in his right foot that cost him much of last season to post one of the best years of his career. At just 27, he is in his prime and capable of being the centrepiece of a championship squad here — or elsewhere.
Durant would stand to make significantly more money if he signs for a year with Oklahoma City, then signs a longer deal with the Thunder the following year.
Two days after the Thunder lost to the Golden State Warriors in Game Seven of the conference finals, Durant ruled nothing out.
"I really haven't wrapped my mind around it since it's so fresh coming out the playoffs," he said on Wednesday. "I really haven't thought about next week, moreso than next month or what's going to happen."
With the salary cap going up, many teams will have the money to make a run at him. Washington, Durant's hometown team, recently hired former Thunder coach Scott Brooks, whom Durant has great respect for. Philadelphia's Joel Embiid and Boston's Isaiah Thomas have taken to Twitter in hopes of luring Durant east.
Durant said there will be very little outside influence on his decision.
"I've got to just hear from me and hear what I want and talk to myself on what I need and how I can make this thing work for myself and just try to be a little selfish," he said. "Obviously, I'm going to have some advice, but also, I want to make the decision that's best for me."
He said he loves his teammates and at times he spoke as though he planned to be back.
"Are we going to work on our game and come back even better, or are we going to be excited about what we did?" Durant said. "Be complacent, or are we going to want more? I think that's the next step for us all — thinking of how we can all be better."
Durant said he doesn't plan on bouncing from city to city as teams try to woo him, stating, "that's not who I am”.
"It may seem like I'm not talking and I'm not giving information, but I'm just really trying to make sure I tie everything up properly and make this thing right," he said.
Durant has elevated Oklahoma's profile so much that he was inducted into the state's Hall of Fame late last year. And Durant has made a point to have a local presence. He donated $1 million in disaster relief to the Red Cross in 2013 after a tornado ravaged south Oklahoma City and Moore. He also owns a popular restaurant in downtown Oklahoma City.
"He's obviously had a great impact on this community and this organisation," Thunder coach Billy Donovan said. "Obviously, the organisation and the community love him a great deal as well. This is about Kevin. If he needed anything from me, I would be there to talk to him about anything. But this is about what Kevin wants to do and it's his decision."
Durant bounced back from his injury to average 28.2 points per game - more than when he was scoring champion in 2010-11 and 2011-12. He grabbed a career-high 8.2 rebounds per game and added 5.0 assists per contest, the second-best total of his nine-year career. He improved as a defensive player, at times dominating in the play-offs.
Along the way, he avoided allowing the hoopla around him to be a distraction.
"I could not be more impressed with the way he handled this year," Donovan said. "Everywhere we went, people wanted to talk about it and he never allowed it to get into the team and I really, really respected that and admired that. He put the team first."
Durant's choice could have a domino effect, with Russell Westbrook entering the final year of his deal.
The current core has a promising future. The Thunder took a 3-1 lead on the Warriors before losing the next three games. Together, they could make a move in the West, provided that the youngest emerging stars — Steven Adams and Enes Kanter — continue to improve at their rapid pace.
Kanter, a seven-foot post who is just 24, was third in the sixth man of the year balloting. Adams, a seven-foot post who is just 22, emerged as a bruising, yet agile double-double threat during the play-offs. Shooting guard Andre Roberson, known as a defender, showed promise as a scorer late in the play-offs. Those talented young players could make it tempting to stick around.