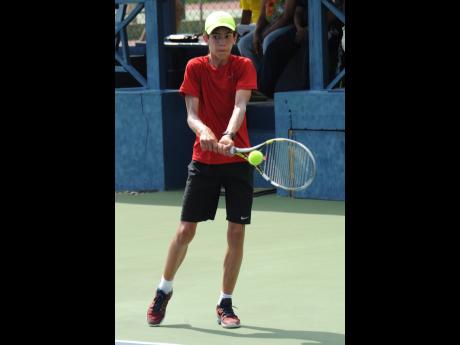 Several seeded players booked their places in the quarter-finals and semi-finals of the Access Financial All Jamaica Junior tournament at the Eric Bell Tennis Centre on Piccadilly Road in Kingston, yesterday. Boys and girls are competing in the 18-and under, 16-and under, 14-and-under, and 12-and-under categories.

Leading the charge of seeded players was Cliff Dwyer, the No. 1 seed in the boys 18 and under. He got into his rhythm quickly and disposed of Karan Chatani 6-0, 6-0. He will face much steeper opposition in the next round, however.

Also through in the 18 and under was Luke Quaynor, one of three London-based brothers in the tournament, who have been performing well. Luke faced the No. 4-seeded Gregory Spencer yesterday, and after falling behind 1-3, he suddenly found his range and Spencer never won another game. The final score was 6-3, 6-0. No. 2-seeded Daniel Hill also moved confidently into the next round with a decisive 6-3, 6-1 victory over Anthony Burgess. The No. 3-seeded player in the same age group, Kyle Martin, was brutal in disposing of his opponent, John Luck 6-0, 6-0.

There were some excellent performances in the girls' section of the draw. Michaela Stephens, in the 18 and under, was impressive in defeating Cobi Wilcott 6-4, 6-0. Wilcott pressed her opponent hard in the first set, to go under by only one service break, but wilted in the second set and did not win a game.

Eight-year old Alyssa James, who is competing in both the girls 12 and under and 14 and under, followed up her victory on Wednesday in the 14's, with a decisive 6-0, 6-0 victory over Kalilla Morris yesterday.

Play continues today, starting at 9 a.m, and the tournament will end tomorrow afternoon.