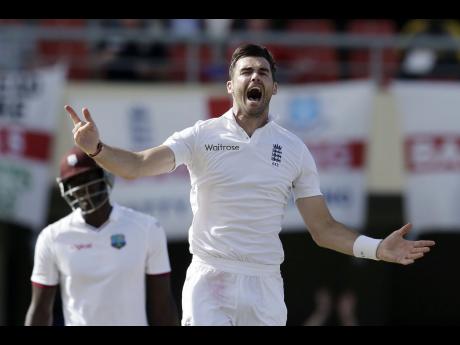 Fast bowler Toby Roland-Jones was summoned by England for the first time and batsman Gary Ballance was recalled in the squad to play Pakistan in the first Test at Lord's next week.

Roland-Jones replaced James Anderson, who has not recovered from a stress fracture in the right shoulder blade that he suffered in the third Test against Sri Lanka last month. All-rounder Ben Stokes, who had surgery after tearing cartilage in his left knee in the first Test against Sri Lanka, was also not ready for a recall, having played as only a batsman for Durham, so far.

England captain Alastair Cook said yesterday that he hoped Anderson would be ready for the second Test against Pakistan from July 22 at Old Trafford.

Either Roland-Jones or fast bowler Jake Ball, also uncapped, was expected to be dropped from the 12-man squad for next Thursday's Test.

With Nick Compton missing out after averaging 12.75 against Sri Lanka as the No. 3 in the triumphant three-Test series, Joe Root has been promoted from No. 4 to 3 in the line-up by England's Australian coach, Trevor Bayliss.

New Zealand Cricket says it is monitoring outbreaks of civil unrest in Zimbabwe ahead of the national team's scheduled tour there later this month.

The team is due to leave New Zealand on Monday for Pretoria, South Africa, for a training camp before flying on to the Zimbabwe capital, Harare, on July 20.

New Zealand and Zimbabwe will meet in Test matches at Bulawayo, beginning on July 29 and August 6.

A spokesman for New Zealand Cricket said it will continue to monitor the situation during the team's stay in South Africa. Workers in Zimbabwe are striking and police have clashed with demonstrators during protests over the nation's economy.

New Zealand's foreign affairs ministry has warned that travellers to Zimbabwe "should be vigilant and maintain a high level of personal security awareness".

Wales fans will get the chance to welcome home the European Championship semi-finalists today with an open-top bus parade through the streets of Cardiff and a performance by Welsh band Manic Street Preachers.

A 2-0 defeat by Portugal in Lyon on Wednesday brought Wales' presence at the championship to an end.

As well as the bus parade, The Football Association of Wales (FAW) is opening Cardiff City Stadium today. There will be a presentation to the players and coaching staff, as well as music.

FAW chief executive Jonathan Ford said: "We feel this event is a great way of everyone celebrating what has been a historic period for Welsh football."