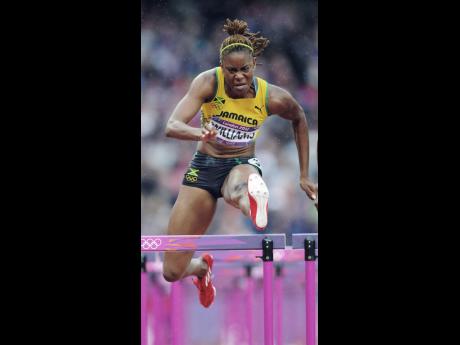 Rio-bound Jamaican hurdler Shermaine Williams says she is hoping to continue Jamaica's rich tradition in the event when she opens her campaign at the Olympic Games next month.

Williams finished second at the National Senior Championships in 12.90 to secure her ticket to Rio de Janeiro, where she will be looking to follow in the strides of medal-winning Jamaican sprint hurdlers - the last of which was her younger sister Danielle, the reigning World champion, who fell in the final at the Jamaican trials and missed her chance to compete at the Olympics.

"I do feel pressured sometimes. Looking at the history, we have been doing very well over the years, and I do feel like it's also my responsibility as well to push on and carry on that tradition," she said.

The older Williams is expecting her sibling to bounce back from her disappointment, but is also keen to make her own mark in the event, after barely missing out on the final during her last trip to the Olympic Games in London.

She has had to hurdle a few injury issues this season and was a doubt for the trials after suffering a serious knee injury in the weeks before the competition.

"I am really grateful. It has been a rough season, and I'm just giving God thanks that I was able to pull through and make the team. This one was very emotional for me because I had an injury in February. It was a torn ligament and I really felt like I wasn't even going to be able to make it to trials at all," Williams told The Gleaner. "At one point, I was getting back and it felt like I took couple step forward and four steps backwards, and so I felt like I wouldn't even get to try to make the team.

"Even like a week before trials - or two weeks - when I was in Boston, there was a lot of instability when I ran and I wasn't sure if it would be stable enough for me to run at trials, so I'm really just giving God thanks," she added.

"I have been running 13 seconds all season, so I just told myself that I was going to pull it together and be strong and try to run a technically sound race from start to finish and run through the line as best as I can," Williams said.

She added that she has gained significant experience since her last Olympic trip and is looking to follow up her appearance in the final at last year's World Championships with a similar target in Rio.

"Getting to the World Champs final last year has helped. Making it to the finals at the World Championships motivated me, knowing that I am capable of competing with the big guns.

Since competing at trials, Williams twice finished second at the Blue Marlin Classics in Nassau, first running 13.44 seconds in a heavy headwind in the heats, then 13.12 in the final.