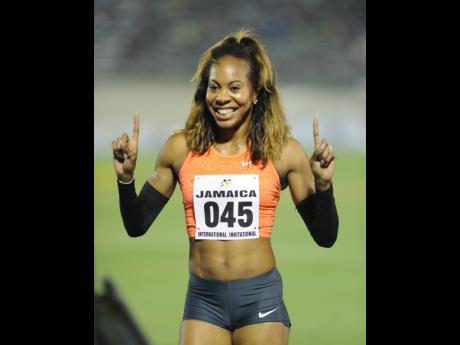 Ricardo Makyn
Sanya Richards-Ross celebrates winning the women's 400m final at the Jamaica International Invitational, at the Nationals Stadium on Saturday, May 10, 2015.

Of all the Jamaicans who have competed for other countries in sport, Sanya Richards-Ross is perhaps the one received most warmly by those who wear black, green and gold in their hearts.

Her obvious love for her home country and her speed make her a superstar here.

The move by the 2012 Olympic 400-metre champion from the track to the broadcast table is probably the first of a wave of retirements by established stars of athletics.

Her international career started uneasily. The daughter of a former Jamaica football international and a star at Vaz Preparatory, Richards first ran for the United States at the 2002 World Junior Championships hosted in her home town of Kingston, Jamaica.

A faint chorus of discontent mingled with applause when she was announced ahead of her first race. She waved nervously and the moment passed, paving the way for a great career.

After a short stint at the Immaculate Conception High School, she blossomed at St Thomas Aquinas High School in Fort Lauderdale. From there, she moved as many Jamaican track talents have to the University of Texas.

Early success saw the 18-year-old debutant through to the 2003 World Championships, where a smart relay leg helped the United States of America to win the 4x400m over Russia and Jamaica, respectively.

Third time was the charm for Sanya. She won individual gold in the World Championship 400 metres at the third attempt, with an expert run of 49.00 seconds flat in 2009.

That was redemption after she had imploded in the 2008 Olympic final and faded to third. Four years later, she won majestically in 49.55 seconds. She had been a finalist in her first Olympics in 2004.

World Indoor champion in 2012 as well, Sanya has kept Jamaica on her agenda. She raced at the Jamaica International Invitational many times and her battles with Novlene Williams-Mills are a big part of that meet's history.

Appreciating her greatness, the National Stadium audience afforded her a warm welcome each time she touched down at the Invitational.

A repeat donor of equipment to Vaz Prep, she also was guest speaker at the RJR Sports Foundation Sportsman and Sportswoman of the Year Awards in 2010.

She wasn't just a one trick pony. Second to Tonya Williams-Darling of the Bahamas in the 400m at the 2005 World Championships, Sanya is one of history's best all-round sprinters. She has run the 100m in 10.97, reached the Olympic and World finals in the 200m, and battered the 50-second barrier in the 400m 48 times.

Her best 400-metre time is 48.70 seconds. That makes her the seventh-fastest woman of all time. By comparison, the Jamaican record is 49.30.

Injuries have slowed her down since London and her retirement at the recent US Olympic Trials is a sign to us all. She will watch the Olympics as a TV commentator, while her contemporaries like Usain Bolt, Shelly-Ann Fraser-Pryce, Williams-Mills, Kerron Clement, Blanka Vlasic, Meseret Defar, Tirunesh Dibaba, Justin Gatlin, Christine Ohuruogu, and Asafa Powell sally forth into battle one more time. All of them have given fans their monies' worth during their careers.

Now Sanya, at 31, has led the way into life after track and field. Hers was a wonderful career to watch.

• Hubert Lawrence watched Sanya mine gold in the 2009 World Championships and the 2012 Olympics.