Blake's new luxury watch is like a 'second skin' 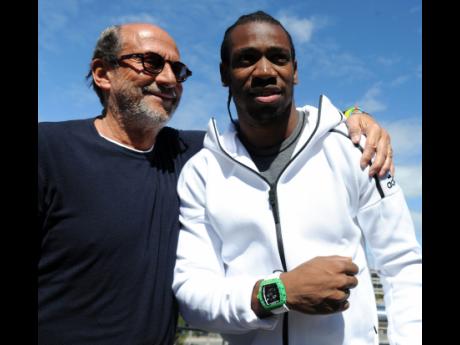 When Yohan Blake takes the track in the men's 100 metres and 200 metres he will have a famous fan in the stands, luxury watch maker Richard Mille, the same man whose name is on his new US$1 million dollar watch.

The Frenchman highlighted his association with Blake and shared the reasons behind the support.

The custom watch features white bands with green stitching, a green and gold case with signature Richard Mille construction as well as a black bezel plus a black dial with skeleton movements and gold accents.

"I wanted to do in the case of this watch, the Jamaican colours. It was not easy because it's very technical material, carbon fibre and quartz. I wanted to include some gold leaves and it has been a nightmare to make the thing work but I love that, the new watch is amazing," said Mille.

"The objective was to do a watch that was extremely resistant, light and very comfortable, we achieved that and for him the watch is like a second skin. It feels very well on the wrist and I like to do watches that are in one sense complex but also very resistant and comfortable," he added.

The businessman said Blake's rise as the future of sprints, Jamaica's appeal and the athlete's personality were all big draws and influences behind the decision to partner with the athlete.

"It was a funny story because the deal was concluded two or three weeks before the Olympic in London in 2012 and it became like a love story at first glance. After that our relationship has got closer also because Yohan is a fantastic human being, he is a fantastic man. He is spending a lot of money for his foundation. I said we have to help also his foundation and we became closer and closer and now we are family," Mille said.

"Jamaica is a religion, so for me Jamaica is not just a beautiful country but also a place with really interesting people. I have more and more friends in Jamaica, maybe I will retire one day in Jamaica," he added.

"The fact that Yohan was also at that time a young champion was also very interesting for me. I like to start nice stories and grow up together step by step with our partners. All my relationship with the sportsmen I made were intended to be long term, so sometimes in the business there are people with a problem and people throw them away.

"With Rafa Nadal he had problems with his knees, shoulder, wrists, we are still together; I had the same problem with Massa, he had an accident and it took him more than a year to come back but I like nice family-type love stories," said Mille. "Our relationship with Yohan will go even after he is retired."

Mille and Blake's YB Afraid foundation recently treated five boys from the Mount Olivet Boys' Home in Manchester to a 10-day trip to France, an experience that has stuck with the watchmaker.

"We had a group of kids coming to Le Mans Classic, which is an event which takes place in July every two years and they decorated my car - the car I race, it was a fantastic design it was a beautiful painting with stunning results," Mille said. "We kept them for more than a week in Paris and outside Paris, we brought them to several places and it was so nice, and it's a pleasure to help Yohan with his foundation."

Mille started his company in 1999 and has pushed it to its current status as one of the most luxurious and valuable watch brands on the planet, selling on average for several hundred thousand US dollars.