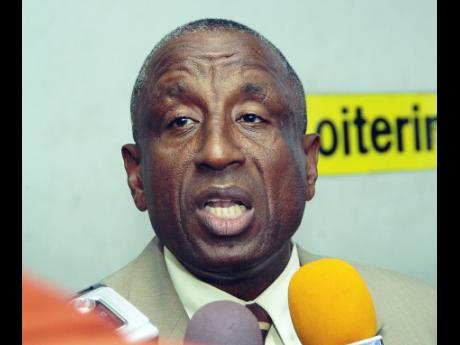 Ricardo Makyn
Brown ... I want to have nothing to do with them again.

There will be no sixth time as national coach for Carl Brown. Sixty-five-year-old Brown, who was last week named as one of the men being eyed to replace German Winfried Schaefer as head coach of the men's senior national football team for two Caribbean Cup matches on October 5 and 11, told The Gleaner yesterday that he will not take up the offer.

"I am not available," Brown told The Gleaner in response to a query about him accepting the offer to return as national coach on an interim basis, with another former national coach Theodore Whitmore as his deputy.

The reason for rejecting the offer was the disrespect meted out to him by the Jamaica Football Federation (JFF).

"I am very disappointed with the whole approach of the JFF. Captain (Horace Burrell) called me on the subject and I told him I would get back to him on the matter as I had to have a conversation with the people with whom I work. Following that discussion, I called him back three times and got no answer. Not only that, but I did not receive a return (call)," explained the man who captained Jamaica as a player and who played an integral part in Jamaica's historic qualification for the 1998 France World Cup.

"The following day, I received an email with what I can only call an insulting and disrespectful offer. It was really low and I did not know that I would see the day when the JFF would sink to this point," said Brown.

"The letter, which said it was following up on my discussion with Captain Burrell, only offered me US$100 per day for the duration of the agreement. There was nothing about how I would get to Jamaica, nothing about accommodation. Nothing!"

A part of the letter, which appeared over the signature of general secretary Raymond Grant, read:

This letter serves to confirm your discussion with the President of the Jamaica Football Federation, Captain Horace Burrell, to engage your services as head coach for the national senior men's team, for the imminent two games of the 2016 CFU Men's Caribbean Cup scheduled for October 5 and 11, 2016.

In preparation for the two games mentioned above, most of the players are expected to arrive in the island on 3 October 2016 and will be available for the duration ending 12 October 2016.

For the period of your engagement, you will receive:

- Access to office and meeting space at the JFF Secretariat..."

"This is nothing but disrespect and a disgrace," Brown fumed.

Brown said that at his base in Florida, he would just need to work with just four children for an hour to exceed that amount.

"It was not about the money. It is the level of disrespect. They would have never sent off an email like this to Rene Simoes or any other foreign coach they are seeking to engage.

Brown, who worked with Brazilians Simoes and Sebastiao Lazaroni as coaches of the national team, as well as on his own at different points, said that a year ago he made an offer to work with a local-based Jamaica team for free.

"About a year ago, I saw (Lincoln) Happy Sutherland at breakfast and I told him to speak to the powers that be for me to be given permission to assemble and prepare a local squad and I would do it for free, but nothing happened. This was because I saw what was happening with my country's football and wanted to help.

"But this is it for me and them. That email has taken everything out of me. I want to have nothing to do with them again. This is the lowest I have felt," Brown vented.