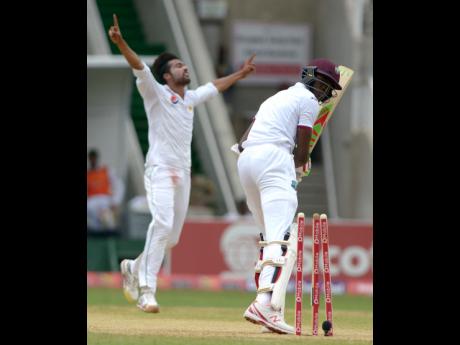 Ian Allen
Mohammed Amir celebrates after he bowled Alzari Josephs for a duck in the West Indies rain affected first innings on day 2 of the first Test at Sabina Park on Saturday.

It is absolutely not my intention or wish to continue to beat that proverbial dead horse. The dwindling appeal of Test cricket, especially in the West Indies, but the substance of my column this week is inspired by a unique, and in a sense weird, instructive experience.

I found myself in possession of a couple of extra complimentary tickets for the historic 50th test match at Jamaica's cricket Mecca, Sabina Park. The tickets were for Saturday's second day when traditionally most cricket fans would indulge in the experience of the ebbs and flows of what was promising to be a competitive Test match between the home team West Indies and Pakistan.

On Friday evening, well before the rains came, I realised that I would not be able to attend Saturday's play, so I immediately set about calling around to close family and friends who I thought would be interested in watching some Test match cricket.

My first choice was my brothers, knowing first hand of my sibling's deep affinity for West Indies Cricket. I called my first brother and told him I had two tickets to cricket, in a muted tone, he said he thought of attending the game but decided against it. I called my second brother, again with what I thought would have be musical cheers to his ears; he said thanks, but no thanks, he was heading out of town for the weekend, I then called my third brother, who was far less diplomatic, saying he was not interested in watching the West Indies lose.

Having exhausted all my family options, I then turned to some good friends who I knew were avid cricket fans. Friend number one said he would be busy and would not be able to make it. Friend number two never answered my call or my voice note, explaining the availability of complimentary test match tickets. Things were getting desperate, so I flippantly asked my other half if she wanted to watch some cricket on the weekend, she was blunt and terse in her response saying, "I have better things to do than to waste an entire day watching the 'wutliss' West Indies."

I was still determined to do this good deed and not let the tickets go to waste, so I called two other cricket friends trying to sell to them the historic nature of the game and encourage them to go out and support the West Indies, almost in a chorus they responded with an emphatic 'No!, Not interested!'.

It was then that I realised that I was faced with the once unthinkable reality of having two premium complimentary tickets for test match cricket at Sabina Park, and absolutely no one I knew seemed interested in these tickets.

I could not help envisaging the contrast that would surely occur in my having two complementary tickets for any Sabina Park game in the upcoming the Caribbean Premier League (CPL) and struggling to find any takers. That would never happen. Indeed, I would certainly struggle to get hold of two complementary CPL tickets in the first place.

In reflecting on the here and now, I can remember the glory days when the West Indies were THE West Indies.

I can remember how excited I would get at the mere thought of the Windies coming to Sabina Park that special experience of my father taking me to see the great champion team with the likes of Clive Lloyd, Viv Richards, Michael Holding, Malcolm Marshall, Joel Garner and company, when a ticket to cricket was like precious gold. Compare that to the here and now, when there are still no takers for my tickets. This is yet another stark reminder of how the face of cricket has changed, especially in the Caribbean.

The attendance for this test match was predictably, but still heartbreakingly poor. For the few purists who remain in denial about the demise of Test cricket generally, but especially in the West Indies, you can all continue to put your own spin on that reality if it gives you hope.

Incidentally, I still have those two tickets.