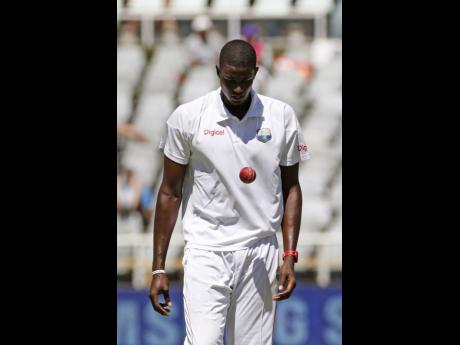 Captain Jason Holder says the first hour on today's fourth day will be critical and has urged his batsmen to apply themselves, as West Indies look to set up a series-levelling victory in the second Test.

The hosts ended day three of the Kensington Oval contest on 40 for one in their second innings, still 41 runs away from cancelling out Pakistan's first innings lead.

But with the pitch becoming increasingly difficult for run-scoring and Pakistan expected to employ a trial by spin, Holder warned that the Windies fortunes now rested heavily on the batting group.

"We've obviously got to make use of the first hour," the all-rounder told a media conference.

"Similar to what Pakistan did to us today, we've got to do to them ... make sure we see of that first hour and it's important that (Shimron) Hetmyer and Kraigg (Brathwaite) do that for us and make sure they solidify the innings, set it up nicely for us in the back end.

"I believe it's a tough pitch to score on. Most batsmen that made runs on the pitch had to graft and really fight hard for their runs so I don't think it's going to change much. The pitch may probably deteriorate a little bit more and become difficult to score."

West Indies did well to limit Pakistan to 393 all out in their first innings, after the visitors resumed the day on 172 for three.

Opener Azhar Ali converted his overnight unbeaten 81 into 105 while captain Misbah-ul-Haq made 99 after starting the day on seven.

With 14 overs left to navigate in the final session, the Windies lost Kieran Powell cheaply for nine but the 20-year-old left-handed Hetmyer hit four fours in a 34-ball unbeaten 22 to push back the Pakistan bowlers.

Holder said erasing the deficits and building a lead was crucial and stressed the importance of the top order standing up.

"The first priority is to get a lead, put some runs on the board for Pakistan to chase," he noted.

"The way the pitch is playing and if it deteriorates a little bit more, probably anything in excess of 175 would be good for us and give ourselves chance and time to bowl Pakistan out.

"But first we've got to set it up in the morning. We've got to make use of that first session. It's important that Kraigg and Hetmyer carry it for us as far down as possible and if one of the top four batsmen can get a hundred that will put us in good stead."

He continued: "What we've got to do is take our scoring options as they come. You have to graft. The pitch is not a free-scoring surface that you can come in and play strokes so any opportunity we get to put the ball away, we must maximise that and make use of every bad ball.

"They rely heavily on the two spinners and we expect that. There's a lot of rough there especially for the left-handers so they have to be extra cautious playing out of the rough but [each batsman needs to] come up with a pretty decent game plan and look to capitalise on any bad balls that are presented."