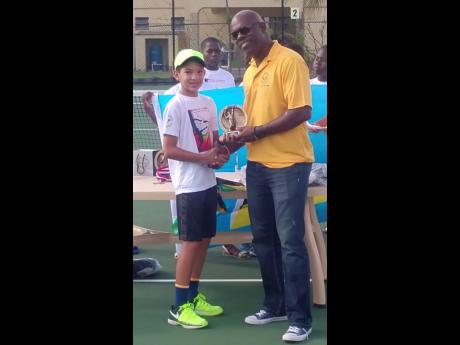 The All Jamaica 12-and-under champion dominated the recently concluded COTECC 12 and Under Junior Invitational Championships held in Antigua and Barbuda April 29-May 1 by capturing both the singles and doubles titles.

Azar did not lose a set throughout the four-day tournament, defeating players from St Lucia, Trinidad and Tobago, Antigua and Barbuda, the United States of America, and the British Virgin Islands on his way to capturing his first major singles and doubles titles on the COTECC calendar.

"The competition was tough but I had prepared well and am super happy. After a few days off, I will get back to work and I am looking forward to even bigger and better things," Azar said.

In the semi-finals, Azar defeated St Lucia's Arden Rosemond 4-2, 4-1, before going on to defeat Jaiden Julien of the USA 4-2, 5-4 in a keenly contested final.

Azar dedicated his victories to his former coach and uncle, former national champion Eddie Smatt, who died last year while en route to the same tournament.

Equally dominant in the girls' division was Antiguan Sybley Charles who won both the singles and doubles titles.

The tournament, which was being held for the fifth consecutive year, attracted 30 players from nine countries.