Levy: Hurdles to cross at JII 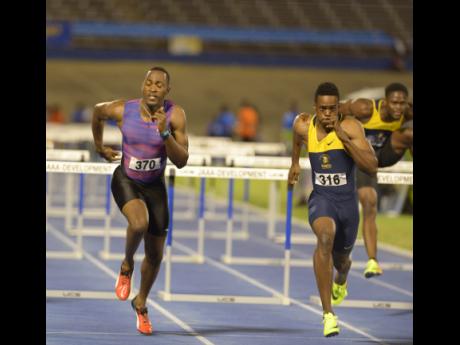 Ronald Levy, undefeated in three races so far in 2017, has hurdles to cross at this Saturday's Jamaica International Invitational.

Levy has fallen in the 110 metres hurdles at the last two Invitationals but recently made a psychological breakthrough by winning at the Penn Relays.

The powerfully built University of Technology student is primed to go faster than he has done so far this season.

Coached by Stephen Francis and 2009 World 100 metres hurdles champion Brigitte Foster-Hylton, Levy has won at the Jamaica Inter-Collegiate Championships and the UTech Classic as well. He places the highest premium on his win at Penn last month. He followed times of 13.41 seconds at the Inter-Collegiate Championships and a wind-aided 13.15 to beat national record holder Hansle Parchment at the Classic with a run of 13.33 seconds at the Penn Relays.

"After I came out the blocks," he recounted of the latter race last week, "and I attacked the first two hurdles, I hit hurdle three or four and that took me off, so I said, 'Levy, you don't need to hit any more hurdles so just try to finish this race and whatever happens, happens.'

"So when 13.33 came up, I was like 'ok, could have run faster still but I'm okay with that'", he recalled. It was a relief since he had fallen at Penn on two previous visits.

"For me, winning at Penns was basically a psychological boost," he said of the mindset he is carrying to the Invitational and the rest of the season.

The 13.33 moved him to number eight in the all-time Jamaica performance list and to joint seventh in the world this year. His personal best before the season began was 13.50 seconds.

Having overcome injuries by diligent work on rehabilitation, stretching and other preventive measures, the construction management student says Jamaican 110 metre hurdlers are getting better.

"You have to run really fast to be a part of Jamaica's sprint hurdles team. So it gives you a boost to say you need to push harder each and every day," he said.

He looks up to Parchment and 2016 Olympic silver medal winner Orlando Ortega of Spain. "The way he operates even when he's warming up,"Levy observed, "okay, this guy is serious."