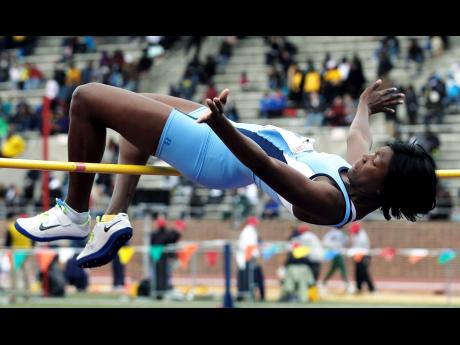 National high-jump champion as a student-athlete at Edwin Allen Comprehensive High School, Kimberly Williamson is adjusting to life as a professional. She cites harder training, the rigours of travel, and focus on small details as the big differences from her life as a college athlete. Nevertheless, she says her results are encouraging.

Speaking in Jamaica last Friday, she said, "I'm used to having my coach and my team telling me what to do, where to go, how to do things."

"Here, I'm doing all that on my own," the 23-year-old said to explain one key difference. "It's a crazy experience," she commented, "But I'm enjoying it." She was in the island for the Jamaica International Invitational (JII) after performing in Guadeloupe just two days before.

Still based at Kansas State University for whom she won the 2016 NCAA Championship high jump title, she said her training work has accelerated.

"Oh, my God!" she claimed, "After indoors, it was like the work was on another level." She reported with a smile that the benefits are evident. Though she jumped 1.88 metres while at Edwin Allen in 2011, she has already set indoor and outdoor personal bests of 1.88 and 1.91 metres respectively this season.

"So far, practice has been going really, really great, and the results are showing."

The gains come from attention to detail.

"We're mainly working on the small things because it's really the small things that affect bigger performances," she said with reference to her three-pronged coaching team of US jumps guru Cliff Rovelto, his wife, Karol, and 2012 Olympic silver medal winner Erik Kynaard.

"So that's what we're really working on right now, staying on the curve, staying away from the bar," she listed, "just the little things that can compound and affect how you perform."

"He coaches differently because he operates just as a coach," she outlined. "He coaches as an athlete as well because he's still an athlete and he knows the struggle and the frustration of trying to get things done and not being able to," she surmised.

"But they're all good coaches," she concluded.

Perhaps tired from her travels, Williamson wasn't at her best at the JII. She cleared 1.85 metres and tied for fifth. Levern Spencer, St Lucia's 2015 Pan-Am winner, won with a height of 1.90 metres.