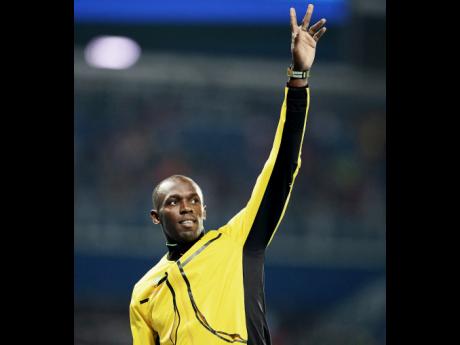 With virtually every stride, Usain Bolt has written a paragraph of Jamaican and global track and field history. Chapter after chapter, the iconic sprinter has both defied logic and stretched the boundaries of our expectations.

Last night, inside the National Stadium, Bolt went with the starter's gun for the final time on the Jamaican stage. His 84th race on local soil became his last.

More than 30,000 screaming fans - many of whom witnessed some of his other special races at home - like that 2002 World Junior Championships 200 metres gold medal charge - pressured the very seams of the National Stadium at the JN Racers Grand Prix for the chance to get a final glimpse of greatness - in the flesh.

Dignitaries, fellow global superstars, grateful Jamaicans, foreigner from near and far - the National Stadium was a hive of emotions.

It was a fitting farewell for the big Jamaican and a clear demonstration of his impact and influence in a country that, though so insignificant in geographical terms, has made a gargantuan contribution to the planet's pulse - whether through culture or sports.

But even among Jamaica's giants, Bolt is a colossus.

"They listen to Bob Marley's music (and) they think of Jamaica. It's just a wonderful, as we would say in Jamaica, 'link up' and connection that Jamaica - which is such a small country - has such an awesome presence through its music and through track and field," added Grange.

On the track, Bolt is an inspiration, but his influence does not stop there.

His ascension has brought and will continue to push more talented Jamaican youth to the sport. In Jamaica, where not enough is taken seriously enough, athletics is now seen as big business - Bolt's brilliance has led a boom where the local industry is concerned. We are still far behind as it relates to sports tourism , but again, Bolt has been a major contributor to the thrust - or trickle - of the Jamaican sports tourism product.

The hunt will begin in earnest for the 'next Bolt', but in truth, Bolt is Bolt; quite like Jesse Owens was Jesse Owens - irreplaceable, incomparable.

"There might not be another Usain Bolt, but there will be another athlete who, in his own right, will create history in Jamaica and in the world," said Grange, again hitting the nail on its head. "He has a wonderful personality. He is just a special human being. He has a dynamic personality. And he is awesome in how he performs as an athlete, yet he is so humble. It is almost as if he is above everything else, but his feet are firmly planted on the ground."

For Bolt, his motivation was simple:

Seems the serial winner has had another victory in that department.

The journey continues at this Summer's IAAF World Championships in London - Bolt's home away from home - but, of course, there's nowhere quite like home.