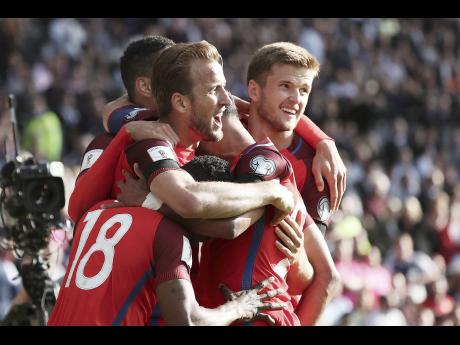 While Harry Kane didn't contribute to the glut of hat-tricks in European qualifying for the World Cup, the England striker grabbed a crucial equaliser in a chaotic finale against Scotland yesterday.

A dramatic final six minutes in Group F at Hampden Park saw Scotland come from 1-0 down to take the lead through two Leigh Griffiths' free kicks. Kane, captain of England for the first time, volleyed home deep into stoppage time to make it 2-2.

Things were simpler for Germany and Poland, who were aided by hat-tricks as the pair continued to dominate their groups.

Despite fielding a weakened team against minnow San Marino, Germany stayed perfect in Group C with a 7-0 win. Sandro Wagner scored a hat-trick on just his second appearance for Joachim Loew's side.

Poland stayed unbeaten as Robert Lewandowski's three-timer took him level with Cristiano Ronaldo at the top of the scoring charts. Lewandowski scored two penalties during a 3-1 win over Romania.

But that wasn't Group E's only treble. Stevan Jovetic scored Montenegro's first-ever hat-trick in a 4-1 victory over Armenia.