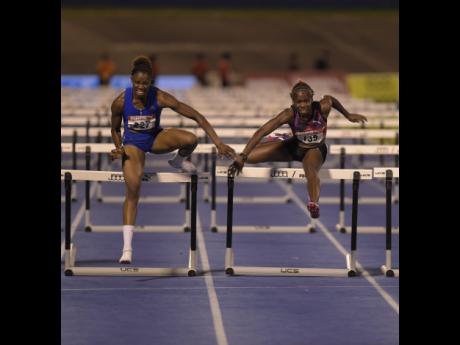 Lennox Graham, coach of reigning World 100-metre hurdles champion Danielle Williams, says his charge is on target to do great things. He believes that her win at last weekend's National Senior Championships will serve as a confidence booster. Graham's next move is to carefully analyse her Nationals' race to find areas for improvement.

The 26-year-old Williams snipped 0.01 off her personal best to log a winning time of 12.56 seconds. She out-duelled 2016 national champion Megan Simmonds, who set a personal best of her own at 12.63.

Williams warmed up for the hurdles by running the heats and semi-finals of the 100 metres.

Like all winners at the 2015 World Championships, Williams is pre-qualified to this renewal of the IAAF event, which is set for August in London. However, coach and athlete used the Nationals to get ready for the three-round format that is used at the World Championships.

"We came here just to run some rounds," he outlined, "because basically we were short on rounds all year."

A quick 12.62 heat performance by the former Queen's School star laid the way for a fast but choppy final.

"It was a very bad technical race," he analysed, "but I'll take a personal best with that, so that's a confidence booster for her, so that she knows that she's on target to do great things this year," Graham said.

Her previous personal best was set in winning the World title in 2015.

BACK TO THE DRAWING BOARD

Graham will be combing through video recordings of the Nationals final. "It's back to the drawing board, looking at that video, figuring out why she got in trouble from the start of the race," he said.

In a reference to last year's trials, where she made a mid-race mistake that cost her a place on Jamaica's team to the Olympics, he said, "She actually recovered this time and made some really good corrections in the middle of the race."

Danielle's sister, Shermaine, placed sixth in a season's best 12.85. "As you know, I coach both of them so it was bittersweet," he lamented.