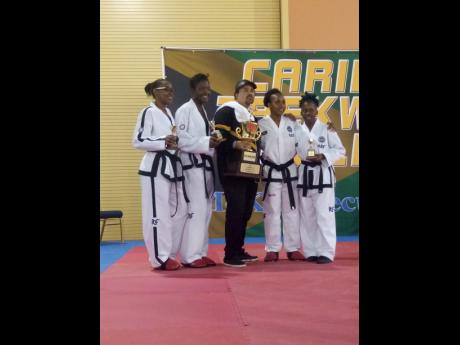 Jamaica's female combined martial arts team yesterday got the island off to a flyer at the International Sports Karate Association United States Open, winning their first Gold Cup title in four tries by stopping a strong Puerto Rico side 8-3 in the final.

The girls opened against the Dominican Republic in the three-team contest and were never pressed, cruising to an easy 12-0 win, failing to drop a point in three bouts.

Subrina Richards, originally booked for a Night of Champions showdown against Argentina's Camila Canut, was a late inclusion, suiting up after officials brought out the rule book which stipulated each match should include two middleweights and a microweight.

The lanky Jamaican took the mat first against Wendy Hernandez and soon had her rival's head snapping back with sharp jabs in a one-sided affair in which the Dominican Republic fighter was twice floored by punches.

Next up was busy Tashauna Grannum, sent in against thickset Evelyn Gomez, who was outmanoeuvred by the Jamaican, who quickly found her range with high kicks, one of which was followed by a punch which left her rival sprawled.

Jamaica next faced Puerto Rico and prevailed 7-3 in what would be the first of two meetings. Richards was again out first and appeared a bit slow to react against Zwimda Ortiz, who actually was awarded on a draw by one of the judges in a 3-0 win for the Jamaican.

Grannum was always on the back foot against a chasing and experienced-looking Nancy Ortiz, who won 3-0 to level the score and keep the Puerto Ricans in the fight to reach the final.

However, that quickly changed when Marissa Jones faced Selena Riviera in a spirited microweight matchup, which she punctuated with a sidekick that had her rival calling time out and an eventual 4-0 win to Jamaica, who advanced to the final, awaiting the outcome of Puerto Rico against the Dominican Republic.

Puerto Rico easily put away the Dominican Republic for a second and decisive match with Jamaica, who won 8-3. Cunningham outclassed Riviera 4-0 and Richards came out storming with a flurry of punches against Nancy Ortiz, eventually winning 3-0, effectively handing Jamaica victory even though Grannum lost the final bout 1-3 to Zwimda Ortiz.

Captain Cunningham was elated, saying the team was well-prepared for the tactical team match.

"Tashauna being on the team made it stronger in terms of height and size. The Dominican Republic's microweight being short also made it easier for Marissa, who had someone her size for once," Cunningham pointed out.

"Coach had a game plan. We discussed it at lunch and it came out just right. This was what we wanted to get out of the way. The team fight was for the country and to redeem ourselves after three tries. Tomorrow, the individuals begin with no such pressure. It's just for us just to go out and execute," she added.