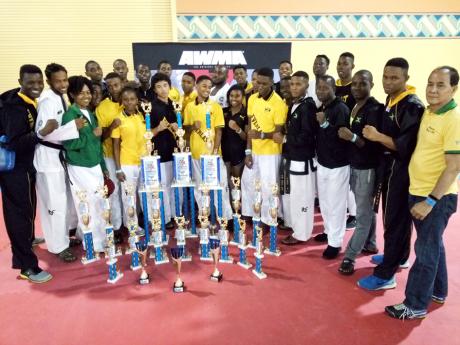 Jamaica failed to add another medal to its tally at the United States Open Saturday night when Subrina Richards lost to Argentina's International Taekwondo Federation (ITF) world champion Camila Canut on the ESPN-televised Night of Champions at the International Sports Karate Association event.

Richards, a multiple International Sports Kick-Boxing Association Amateur Member gold medallist, was hoping to emulate fellow Jamaicans Ackeem Lawrence (2016), Sheckema Cunningham (2015) and Nicholas Dusard (2013) to be featured as Night of Champions winners to millions of television viewers across the world.

However, she was caught flush with an axe kick to the head by the Argentinean and lost her rhythm after a bright start.

Jason McKay, who has coached Richards to major world titles for the last two years in Europe, said the 20-year-old fighter lost little in defeat, pointing out that two of three Jamaican Night of Champions winners - Dusard and Lawrence - had also lost in their first appearance at the event

"Subrina will have many more opportunities. First, she is only 20 and was gracing that stage for the first time, which is no easy feat. You're not talking about your regular international fight. It's a TV production in front of a live audience being beamed to millions around the world.

"As a young fighter, a young anybody - singer, dancer, comedian, politician - that kind of does things to the mind and you don't click right away. Trust me, she will be back," said the veteran martial artist.

McKay said Richards and Canut could very well meet again as early as the ITF World Championships in Ireland, October 9-16, or next year's World Cup in Queensland, Australia.

Jamaica, McKay said, enjoyed another great US Open, winning 68 medals, bettering an average of two medals per participant, after travelling with half the team of previous years.

"If you count the Caribbean Gold Cup, technically, we had 22 gold. Even then, to have ended with 21 gold, 20 silver and 27 bronze, with 30-odd participants, at the biggest martial arts open in the world, fighting athletes from all disciplines over multiple rounds, going up against countries like powerhouse Argentina, we did pretty well."