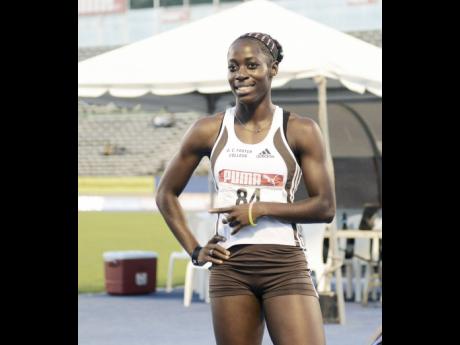 Fresh off a personal-best run in her last 100-metres outing, Olympian Sashalee Forbes will be looking to make further improvements when she faces a high quality field at tomorrow's Muller Anniversary Games IAAF Diamond League stop in London.

Forbes, who will be returning to London next month to represent Jamaica in the 200m after crossing the line in first place at the National Senior Championships recently, will be making her Diamond League debut inside the London Olympic Stadium with several of the world's top names in the event listed to compete as well.

This will in fact be the G.C. Foster College student's first appearance on the European circuit, but it could hardly have been a tougher start to her experience with compatriot Elaine Thompson the double Olympic sprint champion heading a special group of sprinters brought together in London for what is a sort of World Championships teaser.

It's a group that the less celebrated Jamaican will be eyeing and one she will most likely need to join if she is to really turn heads tomorrow.

Despite running faster than she has ever managed in her short career, with a 11.10-second clocking, Forbes could only manage a fifth-place finish in the 100m at trials, meaning that like it was at the Rio Olympics last year where she ran in the heats, she should be named to Jamaica's 4x100m relay pool for the World Championships.

Forbes was also in personal-best shape in the 200m at the National Championships, crossing the line in 22.71 to take top spot and secure her place in the event at Worlds.

A strong performance against a world-class field tomorrow would do her confidence a world of good and show just how ready she is for top-class international competition.

Encouragingly, Forbes has recorded personal best times in her last two 100m assignments, and with big names all around her tomorrow, has a good opportunity to keep that trend going.