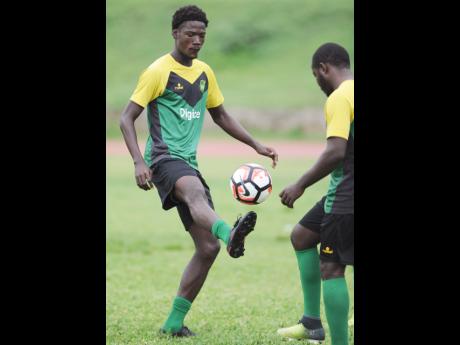 Nicholson, 20, is now in Canada with the Reggae Boyz squad for a friendly international game against Canada at the BMO Field in Toronto, tonight.

However, the International Transfer Clearance (ITC) issued by the Jamaica Football Federation (JFF) Limited to Football Association of Slovenia was granted. Hence, Nicholson is now a NK Domzale player.

A copy of the ITC stated that: "We certify that in accordance with the provision of the FIFA regulations on the status and transfer of players, player Shamar Nicholson formerly of Boys' Town having duly fulfilled his obligations both towards his former club and out association, is therefore free to pursue sports activities and register with another association affiliated to FIFA."

"The transfer was actually on the deadline day, finalised yesterday (Thursday), and we are happy for the opportunity for young Shamar Nicholson," Andrew Price, technical director of Boys' Town told The Gleaner yesterday morning.

"It is a straight transfer, but they are supposed to iron out some personal terms with the player when he returns from Canada early next week. The deal is guaranteed for one year and could be extended based on performance," Price explained.

Price who was always unwilling to sell the player to another local club said that he always believed the player would get a deal overseas.

"I had taken him under my wings as a player because I believe he has the sort of quality that is more deserving for him to get some exposure overseas," he disclosed.

"He understands that this is a once in a lifetime opportunity. Similarly when he was given the opportunity by coach (Theodore) Whitmore in the national team he grabbed it with both hands. Much the same is expected when he takes on this new opportunity overseas," Price shared.

"The club and his agent (Kevin Cowan) had to work feverishly to get the deal done on the deadline. The club has spoken to Shamar and they wanted him," he concluded

NK Domzale were eliminated from the Europa League play-off round by Marseille of France last season. They won the Slovenian First League twice - in 2006-7 and 2007-8.

Nicholson was a member of the Reggae Boyz squad that finished runners-up in the CONCACAF Gold Cup to hosts the United States of America last July.

He has represented Boys' Town at the junior and senior levels. Nicholson was the second highest goal scorer in the 2016-17 Red Stripe Premier League, behind national teammate, Jermaine 'Teddy' Johnson of Tivoli Gardens.