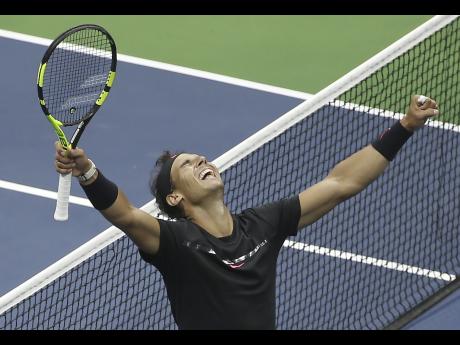 Rafael Nadal against Kevin Anderson in the US Open final shaped up as quite a mismatch and that's exactly what it was.

His game at a high level at the end of an unusually easy path through a Grand Slam field, Nadal overwhelmed first-time major finalist Anderson 6-3, 6-3, 6-4 yesterday to win his third championship at Flushing Meadows.

It is the No. 1-ranked Nadal's second Grand Slam title of the year and 16th overall. Among men, only long time rival Roger Federer has more, with 19.

At No. 32, Anderson was the lowest-ranked US Open men's finalist since the ATP computer rankings began in 1973. The 31-year-old South African never had been past the quarter-finals at any major tournament in 33 previous appearances, so when he won his semi-final on Friday, he climbed into the stands to celebrate.

There would be no such joy for him on this day. Nadal simply dominated every facet of the 21/2 hour final.

Nadal added to his US Open triumphs in 2010 and 2013 and improved to 16-7 in Grand Slam finals. For the first time since 2013, he appeared in three in a single season, losing to Federer at the Australian Open in January, then beating Stan Wawrinka for his record 10th French Open trophy in June.

COACHED BY HIS UNCLE

Nadal's career haul also includes two trophies from Wimbledon and one from the Australian Open. All of his big victories have come while being coached by his uncle, Toni, who is now stepping aside. The US Open was the last Grand Slam event of their partnership.

Not since Pete Sampras at Wimbledon in 2000, had a man won a Slam tournament without facing any opponents ranked in the top 20.

In New York this time, the bracket was weakened by the injury withdrawals of three of the top five men: past champions Andy Murray, Novak Djokovic and Wawrinka.

Plus, Nadal did not need to deal with Federer: The potential for a semi-final, which would have been their first US Open meeting, was dashed when Juan Martin del Potro eliminated Federer in the quarterfinals. Nadal then beat del Potro, the 2009 champion but now ranked 28th, in the semis.

Much like Nadal's 6-2, 6-3, 6-1 win against Wawrinka at Roland Garros, the only beauty of this match was not in its competitiveness not by a long shot but in an appreciation for one participant's absolute superiority.