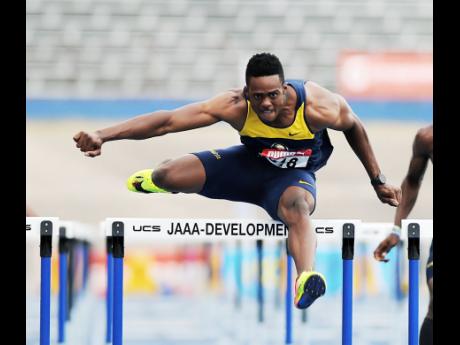 File
Ronald Levy, representing the University of Technology, winning the men's 110m hurdles at the NCB Intercol Track and Field and Cheerleading Championship held at the National Stadium earlier this year. 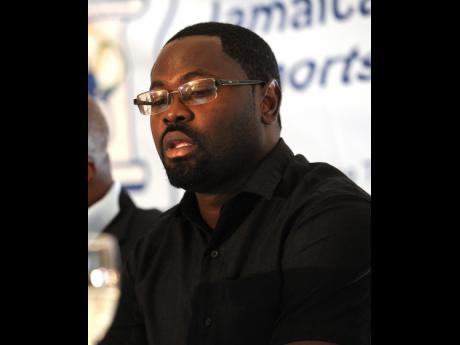 The Intercollegiate Sports Association (Intercol) has given its members until tomorrow to formally state their objections to a proposed amendment to the constitution, which would mean students no longer require a minimum 2.0-grade point average to participate in its competitions.

The directive was sent out by Intercol president Dalton Myers, after some institutions raised objections to the change, which was voted on at Intercol's nnual general meeting last month.

By the new rules, students would only need to be registered for two courses at the University level or a minimum three CAPE or CSEC subjects at Community or Teacher's Colleges to be able to compete in Intercol sports.

"The thing is as a tertiary-level institution, we need to maintain a certain academic standard. With this new rule ... anyone can just come in, register to do a one CSEC course, and they will be able to play in the competition, and that's opening up the door to all and sundry. If we are tertiary, we need to ensure that students are tertiary-level students that are participating," he said.

Local community colleges seem to be being singled out as the institutions which would primarily benefit from the lowering of the standards.

"The community colleges would definitely benefit from this rule, and they are other institutions that would have a "pre-this" and "pre-that", where they would benefit as well," Webb added.

Head of sports at The Mico, Raymond Graham, said that even students at the secondary level have academic standards, which they must meet to participate in sports and said the change would make Jamaica the laughing stock of the world.

"You must have a standard, and we at The Mico University we are not sticking to our 2.0. My superiors are giving full support. We are not going to change. We are not running a club, it is an academic institution first," said Graham.

"We believe that we are operating in a tertiary environment, we have to have some standards. For us, it is not about being an athlete; it is about being in tertiary education and seeking a career path. If it is about just playing sport, there are other club competitions out there. It is the student that we look at, and (we are) giving them the opportunity to advance him or herself," Patrick Graham said.

Intercol's general secretary, Laurence Garriques, told The Gleaner that the deadline was tomorrow because of the approaching season.

"If the membership feels that it can be changed, it can be delayed, so we have outlined some options for the way forward, but because we are about to begin the season, for the considerations to be had, we need feedback by this Thursday (tomorrow)," he said.

The proposals are either for the amendments to be approved or for a postponement in establishing the amendments until a special or annual general meeting is held.

Editor's Note: Raymond Graham is a contracted writer for this publication.