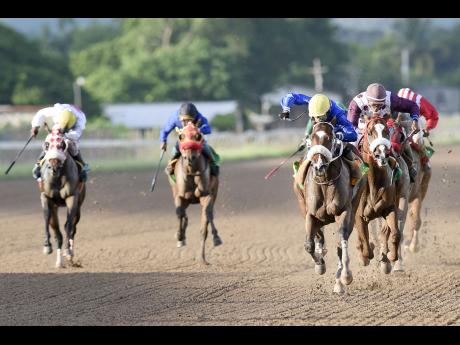 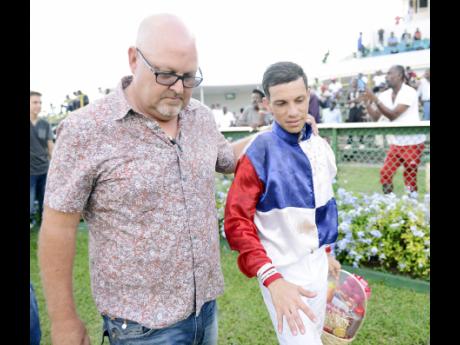 Gladstone Taylor
Trainer Anthony Nunes (left) speaks with jockey Dick Cardenas in the winners enclosure after he partnered with Bilingual to win the 11th over a distance of 1,600 metres, taking the Errol ‘BIG SUB’ Subratie memorial trophy at Caymanas Park on Saturday.
1
2

EL PROFESOR, a half-brother to 2015 Jamaica Oaks heroine Mom's Student, should give Sunrise-6 players a flying start in tomorrow's opening event over 1100 metres at Caymanas Park.

By Casual Trick - The Principal, EL PROFESOR has been training very well for the past two months. His best work came just five days ago when he galloped 1100 metres in 1:07.2 alongside stable companion Another Fury. With the field very moderate, the Fitzroy Glispie-trained colt will have little difficulty in putting away his six rivals.

Race two, over 1600 metres, is confined to $180,000 claimers who have not finished first or second since July 4. The handicaps and distance are overwhelmingly in favour of CHIEF SECRETARIAT, who has been campaigning at the higher claiming level for much of this year. FIRST'K'BOY is expected to lead for most of the way, but expect the selection to prove strongest in the finals stages.

BLOOD SONG, who disappointed as the 9-5 favourite on October 21, should get off the mark in tomorrow's third, a 1600 metres maiden event for three-year-olds. The Traditional - First Choice gelding was slowly out and one-paced in the 1500 metres race, but veteran jockey Shane Ellis remains on board, and with the figure-8 now fitted, the very fit BLOOD SONG will run an improved race.

Punters can bank on BURNING EXIT in Race Four. He comes down to this very low group ($120,000) after keeping pace with $250,000 claimers on September 2. They will only be travelling 600 metres, and the Burning Marque - Lost The Exit colt will be well clear at the end.

ANALOA, to be ridden by hot jockey Dick Cardenas, and EXECUTIVE CHARM, with Dane Dawkins down to ride, will decide the outcome of Race Five. The Anthony Nunes-trained KANALOA clocked a very fast 1:05.4 for the 1100 metres distance on October 21 and looked very impressive.

The handicaps, however, favour EXECUTIVE CHARM. When the two met on September 30 over 1,200m, the latter won with 54kg and now returns 2kg lighter.

KANALOA goes up 2kg after his win 12 days ago. The swing is 4kg in favour of EXECUTIVE CHARM and he is the firm selection.

RUNJOHNNY RUN, competing around the turn for the first time in well over a year, showed tremendous early speed going 1,000 metres among $450,000 claimers. He now comes back over his favourite distance (1,000m straight) and will not be beaten.