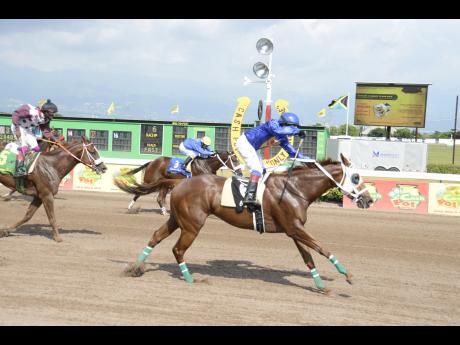 ANTHONY NUNES seemingly has Saturday's ninth event cornered with four of 10 runners, three of whom have sound claims in the 1500-metre event - BLUE TRADITION, A.P.I. and DONTAE, who was bound for the three-year-old classics before injury took him out for six months.

However, that was DONTAE's second race back from injury in a torrid race, cracking splits set by WESTERN WARRIOR, chased by in-form SIMPLY OUTRAGEOUS, before United Kingdom-bred KALAMATA used her stamina to win by a neck at the wire

SIMPLY OUTRAGEOUS, who is much improved, returns for another shot after being beaten by the distance at 1820 metres. She was fifth behind KALAMATA, not too far off DONTAE and BLUE TRADITION, making her a dangerous horse with 48.0 kilos - a distance at which she clocked an eye-popping 1:32.3 when breaking her maiden in August.

However, the horse with the least experience in the line-up, A.P.I., appears somewhat special. For starters, she is unbeaten and is the only runner in the line-up to have won three races.

A.P.I. showed just how improved she was after two starts by making all at 1000 metres straight, never headed, in a field which included lightning-fast LOOSE CANNON, albeit he was slowly into stride.

A.P.I's winning time, 58.4, for five furlongs straight, improving on the 1:00.3 she had posted a month earlier, suggests she is all business and up to the task, having won on debut at 1300 metres on the round course.

Wesley Henry will relish the ride, 52.0 kilos, aboard the controlling speed, a race which he can turn into a sprint after coasting to the half-mile. A.P.I.'s stablemates, BLUE TRADITION and DONTAE, lack her pace, leaving Philip Feanny's out-of-sorts LIGHTNING LILY as the contending speed.

Henry should use his wiles to get A.P.I. home safely. However, if she is found guilty at the distance, SIMPLY OUTRAGEOUS could sentence her.