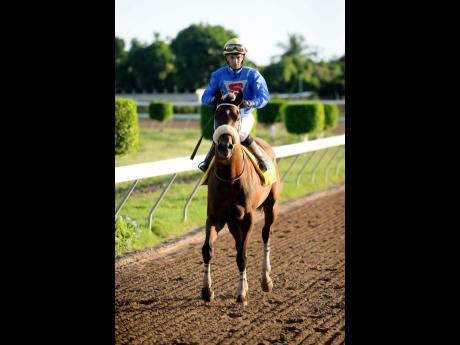 Classic-placed this season, finishing third in the 1000 Guineas behind eventual Triple Crown winner SHE'S A MANEATER, MONEY MAGNET trained on well to feature prominently in grade one races within the last month.

She placed third in the Caribbean Sprint on November 11, narrowly lost in open allowance two weeks later, before returning to finish sixth in the Diamond Mile on December 2.

Having returned to beat open allowance yesterday, MONEY MAGNET has one more win at the level before graduating to grade one.

Meanwhile, CRUCIAL APPEAL won the day's overnight allowance at 1000 metres straight, a brief stay at the level after two attempts.

The seven-year-old chestnut horse finished four and a half lengths ninth in the Caribbean Sprint on November 11, skipping two classes to compete in grade one, after placing second to SIMPLY THE BEST in overnight allowance.

Ridden by Dane Nelson, CRUCIAL APPEAL made all to clock 57.2 at his favourite trip, beating 22-1 outsider PRINCESS EMANUELLE.

Jockey Oneil Beckford stunned punters with 37-1 shocker SISTA MARGARETT in the opening event and returned to land the eighth with PHOTOGENIC at 3-1, emerging as the day's leading rider.

Steven Todd saddled two winners, POWEROFGIVING in the fourth and STERRI'S CHOICE in the 10th to top all trainers.

Anthony Nunes failed to make any real inroad into champion trainer Wayne DaCosta's lead, each winning an event on the 10-race card.

DaCosta's BAND OF GOLD shocked punters by landing the second event at odds of 34-1 whereas Nunes won the ninth with BRUCE WAYNE, both races having similar purses.

Despite BAND OF GOLD's massive upset to start the single-winner Pick 9, the bet was caught, paying a cool $9,037,494, an early Christmas gift ahead of Wednesday's programme and the holiday meets, which follow on Saturday, plus next Tuesday's Boxing Day.