Another Bullet tops them 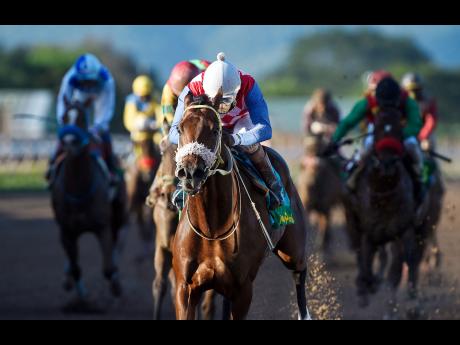 ANOTHER BULLET revelled in a drop in class yesterday to stamp his superiority on overnight allowance runners, sprinting home clear of rivals, at odds of 4-1, in the 1300-metre Ash Wednesday Trophy.

Partnered by Shane Ellis, the six-year-old horse broke sharply in the 14-horse line-up but was relegated by TWILIGHT DREAMS, who tore away on the lead.

Chasing TWILIGHT DREAMS as a team with PRINCESS EMANUELLE, ANOTHER BULLET changed gears at the top of the lane and quickly collared TWILIGHT DREAMS, leaving the field in his wake.

Running with top weight 57.0 kilos, ANOTHER BULLET was unstoppable against his overnight allowance rivals, clocking 1:19.3 for a two-and-a-quarter length victory ahead of PRINCESS EMANUELLE, who ran a big race with 50.5 kilos down along the rail.

LOTTERY TICKET, badly drawn at post-position one and unable to cope with the early pace, stayed on for third, a half-length behind PRINCESS EMANUELLE.

Patrick Lynch's ANOTHER BULLET was one of two winners on the 10-race card for Ellis, who joined Anthony Thomas atop the jockeys' standings on 14 wins.