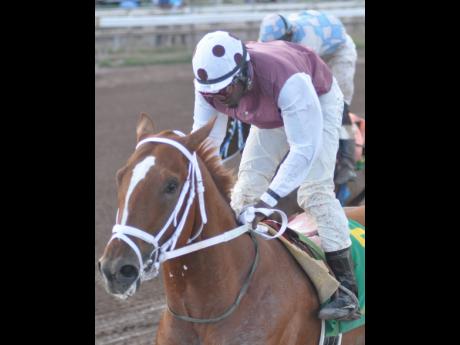 TRAINER Anthony Nunes' SIEMPRE BUENO has been handed what should be an easy victory in Wednesday’s sixth race, carrying 117lb in a 1000-metre straight open allowance event stacked with three of his stablemates.

SIEMPRE BUENO will be partnered by champion apprentice Anthony Thomas, a two-kilo claimer, who is one winner behind Shane Ellis atop the jockeys’ standings.

Due to Thomas’ apprentice claim, the handicaps are overwhelmingly in speedy SIEMPRE BUENO’s favour, unlike his stablemate, ORPHEUS, who is seeking a hat-trick of wins but will carry 126lb with Ellis aboard.

In fact, only one runner in the six-horse line-up is lighter than SIEMPRE BUENO, his distance-running stablemate, DONTAE, who comes in at 115lb.

The last time SIEMPRE BUENO ran five furlongs straight, he clocked 57.0, the fastest time at the distance in quite a while, four-fifths outside the track record, even after being slowly into stride with 57.0 kilos.

Victory aboard SIEMPRE BUENO should keep Thomas in touch with Ellis in their battle atop the jockeys’ table.

The breakout jock of last season, was the most dominant rider at the back end of 2017, winning the Caribbean Sprint with CHACE THE GREAT and the Superstakes, a chance ride astride SHE’S A MANEATER.

Thomas has continued to spark this year, alternating on the lead with Ellis, a two-time champion and runner-up to Omar Walker last year. However, Ellis, for the last two racedays, has forged ahead by one win, coming from two down, after Thomas failed to ride a winner in consecutive meets.

Both riders are on solid mounts and set to dominate the nine-race midweek card with Thomas capable of closing a three-timer as he also looks good for the last double, STORM PRINCESS and REGGAE ROAD.

Ellis should open the card with SQUIT and seems to have established a winning partnership with Errol A Subratie, whose TRUE WHISPER he rides in the fourth after winning for the trainer three times aboard BIG BLACK NATION and PIANO MAN on Saturday.