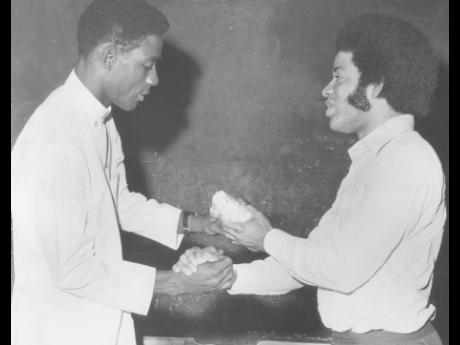 Gleaner photograph
Carl Goodison (right), the All Saints Youth Club leader, makes a presentation to Desmond Lewis in 1971 when the club paid tribute to the former Jamaica and West Indies wicketkeeper for his distinguished performance in that year’s cricket series against India and for Jamaica.

Lewis, who was injured when he fell in the snow some years ago and had been ailing ever since, represented All Saints Youth Club, Kensington Cricket Club, Jamaica, and the West Indies.

While representing Jamaica from 1970 to 1976 on 36 occasions, he was a solid and dependable opening batsman and an efficient wicketkeeper, scoring 1,623 runs at an average of 31.82 and taking 67 catches and making 11 stumpings.

Called to the West Indies team in 1971, nine months after making his Jamaica debut and scoring 96 and 67 not out against the touring Indian cricketers, he played in three Test matches during the series and finished with 259 runs and an average of 86.53 while taking eight catches.

In five innings, Lewis batted at first at number seven in the third Test at Bourda. He returned a score of 88 not out in a total of 363 after joining the action at 226 for five.

In the fourth Test at Kensington Oval, he opened the innings and made 88 out of 501 for declared and 14 out of 180 for six declared, and in the fifth and final Test at Queen's Park Oval, while batting at number two and then at number nine, he made 72 while opening in the West Indies' 526, and not out on four out of a total of 168 runs for eight wickets.

A confident cricketer, particularly as a batsman, Lewis said to me one day after I had written an article before the 1966 tour of England featuring Rohan Kanhai headlined 'Champagne time', "Mr B, you will have to write something like that about me one of these days, you know that."

And then, once, at a Senior Cup match between Melbourne and Kensington in 1976 at Melbourne, with the crowd so huge that people sat on top of the then one-storey clubhouse, I went into the dressing room before the start of the match to deliver a message to Desmond on behalf of Foggy Burrowes. Lewis looked at me and said, "Mr B, is who all dem people come fi see?"

I said, "they must be here to see Rowe and Holding."

They did see him all day.

Rowe made a few runs, dismissed by Holding, and Lewis made an undefeated century.

The story is that when it approached six o'clock, his father, who stood by the gate all afternoon, quietly said, almost to himself, "All day, my son. Bat till the cows come home."