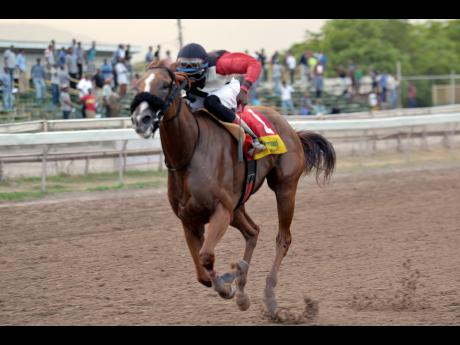 BIRDIE MY LOVE flew home at generous odds of 4-1 in yesterday's Jamaica Veterinary Board World Vet Day Trophy feature race, hanging on at the end by a neck from late-closing PHINEAS in the 1400-metre event.

Partnered by two-kilo claiming apprentice Oneil Scott, the five-year-old mare broke sharply from post-position one to chase JAMAI RAJA down the backstretch.

Moving sweetly against the rail, BIRDIE MY LOVE swooped down effortlessly at the home turn, with Scott glancing nonchalantly at Melissa Ward aboard JAMAI RAJA, before asking the mare to run.

BIRDIE MY LOVE responded by kicking clear and appeared as if she would have been a lonely winner. However, the dangerous oldstager, nine-year-old PHINEAS, came forward strongly under non-claiming apprentice Dane Dawkins to charge at her close to home.

Despite weakening and repeatedly hanging right under pressure, Fitzroy Glispie's BIRDIE MY LOVE staved off PHINEAS to clock 1:25.4, winning her first overnight allowance.

The Fitznahum Williams-trained colt bolted out of the gate in front of the stands and left the clubhouse turn like a scared hare.

Briefly pressed by REIGNING KING, WESTERN LEGEND changed gears a half-mile out and tore away from the field to win by 15 lengths, ridden flat out by Robert Halledeen, lowering the stakes record by a full second to clock 1:56.2.

Trainer Patrick Taylor, whose COMMANDER TWO had beaten WESTERN LEGEND by a head in the 2000 Guineas two weeks ago, agreed it was an awesome run but questioned the quality of the opposition.

"Good, really good, but he wasn't running against anybody. What I don't understand is why the jockey had to hit him so many times in the straight," said Taylor.

The trainers' championship took an interesting turn with 17-time reigning champion Wayne DaCosta reducing Anthony Nunes' lead to a little over $450,000 after starting the day $1.6M behind.

DaCosta landed a triple, back-to-back winners BARCELONA and UNCLE FRANK, in the second and third races, followed by 11-1 outsider QUEEN OF BAGDAD with veteran jockey Gary Richards in the ninth.

Racing continues at Caymanas Park on Saturday with the season's third classic, the 10-furlong Jamaica Oaks for fillies.