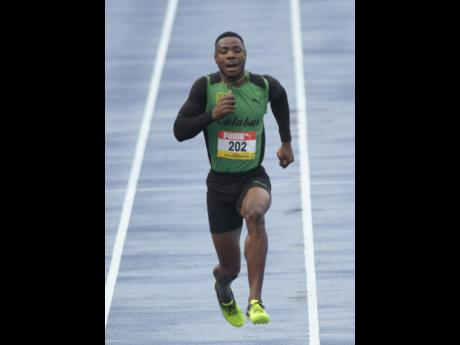 Michael Stephens clocked a personal best 10.30 seconds in the men's 100m heat, to advance to the next round as the joint fastest qualifier at the IAAF World Under 20 Championships in Tampere, Finland on Tuesday.

Stephens, who got the time after winning his heat at Ratina Stadium, will be joined by the other Jamaican in the event, Michael Bentley, who stopped the clock at 10.34 seconds in his second place run in his heat, to also secure a lane in tomorrow's semi-finals, which start at 9:50 a.m.

Wayne Pinnock, 7.76m, had the second best mark of all qualifiers to the men's long jump final and will push for the gold medal along with team-mate Shakwon Coke, 7.55m, who was also impressive in qualifying and moving on to the medal round, which takes place at 9:55 a.m. on Wednesday.

Stacey-Ann Williams will line up in the heats of the women's 400m, which get underway at 8:50 a.m. today.