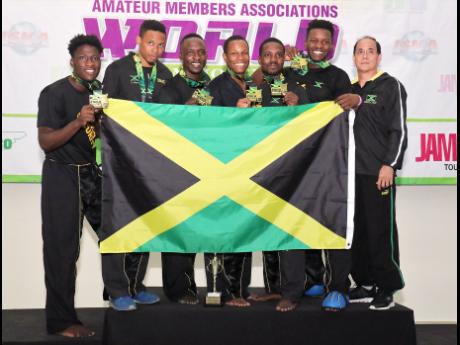 Edwards outclassed England's Mark Rymer with superior technique and movement, finishing off his rival with signature kicks to the head for which the Englishman had no answer.

Jamaica's boys team lost to England, and Marissa Jones went down to classy Ukranian Iryna Butovska in -54kg points sparring, but the hosts brought down the curtains with gold in the men's 18-35 team fighting, continuous sparring.

Expecting a flying start from Akino Lindsay, who had already mined two individual gold, points and continuous sparring, the Jamaicans were put back on the seat of their pants when England's Robbie Kennedy upstaged the hometown favourite.

The Englishman used his vast ring experience to outpoint Lindsay, who, though holding ISKA Amateur Members Association World Championship titles won in Portugal 2015, Greece 2017, and double gold at home, is still learning his craft at 23 years old and was not able to impose himself on Kennedy.

Down 0-1, Jamaica were dug out of a hole by Richard Stone, the 2016 ISKA champion, who was simply bigger and better than his opponent, Mario Colapietro, levelling the score at 1-1 in the five-man team contest.

The next two fights proved decisive for the hosts as Dusard turned up the heat on lanky, but skilful Leon Thompson, who he had beaten on Thursday in the individual rounds.

Thompson, who had described Dusard as "the poster boy of the tournament" on Thursday, was somewhat self-prophetic as the Jamaican gave him no chance to get into a rhythm and won the tiebreaker to put the hosts up 2-1.

Jamaica's next fighter, lightweight Ackeem Lawrence, was clinical and pressed home the advantage, with his teammates urging on his every strike as the scoreboard read 3-1, an unassailable lead. The Brits, however, did not drop their heads and won the final bout as Jamaica's Adrian Moore went down, winded, against his opponent.

Coach Claude Chin was enthused with the team win, which was reminiscent of 2014 when Jamaica historically won team sparring at the International Taekwondo Federation World Cup held at the same venue.

"It was a wonderful performance, very impressive, by the entire team. A gutsy fight by the captain, Adrian Moore, though he lost that match," Chin pointed out.

"Nicholas was his usual impressive self and Ackeem stepped up. It was the best performance I have ever seen from him, showing that he has matured into a wonderful fighter," Chin added.