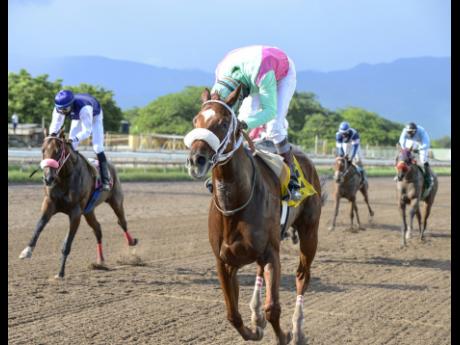 MONEY MAGNET thoroughly outclassed WITHOUT EXCEPTION, hopping to the front a few strides after leaving the gate, and was never headed by her pesky rival, winning yesterday's six-furlong Saint Cecelia Cup by three and a half lengths.

On paper, it was never a race, the graded stakes four-year-old filly benefiting from an eight-month clause that allowed her a drop in class to face open allowance horses.

MONEY MAGNET, who has raced against the best horses in the country since February, controlled the Saint Cecelia from the start, Shane Ellis toying with Omar Walker, who had to be pushing up-in-class WITHOUT EXCEPTION to keep pace from the half-mile.

MONEY MAGNET spun into the stretch run a length clear and easily moved away, making a mockery of the condition which allows graded stakes horses to automatically drop class after going winless for eight months, a get-out-of-jail card that BIGDADDYKOOL recently used to make hacks of rivals in the Nigel B Nunes Memorial.

MONEY MAGNET went off at the prohibitive odds of 3-5, plundering the $1.5m purse, picking up pocket money against lesser rivals ahead of returning among her peers for next month's Caribbean Sprint and December's Diamond Mile.

Nunes also made inroads on champion trainer Wayne DaCosta but still trails by more than $1 million in his bid to break his rival's stranglehold on the trainers' title.