I am still the man for JC - Peart 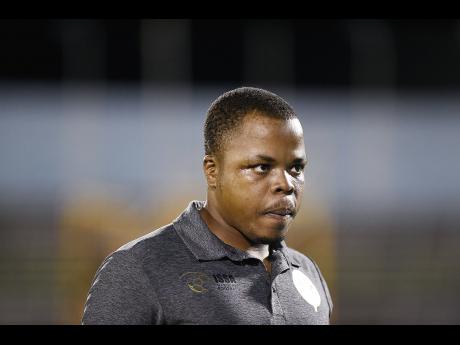 Despite failing to win a sixth straight Manning Cup title for Jamaica College (JC), new coach Andrew Peart believes he is still the man to continue the 'Dark Blues' dominance in schoolboy football.

JC were beaten 2-1 by St George's College in the semi-finals of the ISSA/Digicel Manning Cup football competition last Tuesday at the National Stadium, ending the longest title streak in the modern era of the competition.

Many pundits described the performance as underpar for the standard JC developed under the Miguel Coley era, when they won five straight titles.

And while Peart is disappointed not to be playing in the urban area showdown on Friday, he is not ready to shoulder the blame for not being able to win another title.

"It is not an indictment to have lost. I am disappointed, but ... we came here with the expectation that we would have made it to a sixth straight final, and that didn't happen," Peart said after the semi-final match against St George's.

JC have lost just three times in the Manning Cup in the past six campaigns. Two of those defeats were registered this season. In 2013, they finished the entire competition without dropping a single point.

Those performances have embedded an abundance of confidence in the 'Dark Blues' football programme. "I don't think we were overconfident," said Peart who believes St George's pounced when they let down their guard a bit.

And despite having been served an early warning in the first round of this campaign when they were beaten 2-1 by Kingston Technical High at Old Hope Road, many believed that they would find a way to eke out another title.

"We have done well over the last few years. Every year, we want to win, but it is a difficult task and these things will happen," said Ian Forbes, manager of the team.

"You won't necessarily make it every year. I think the young men have performed creditably. We were one game away from making it to the final. It is a little bit disappointing, but we move on."

Forbes believes the system that is in place at Old Hope Road will continue to churn out champions.

"We have a system which is in place and it is still going well, because, right now, we are in the semi-finals of the Under-14 and the Under-16 competitions, so I say without any doubt that our programme is intact," Forbes said.