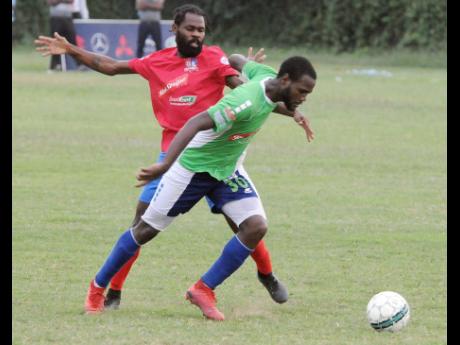 Dunbeholden's coach, Michael Cohen, says the team's 2-1 win over Montego Bay United in their Red Stripe Premier League (RSPL) contest at Royal Lakes Sports Complex yesterday is a major morale booster despite the team remaining at the bottom of the table.

Lorenzo Dubidad (30th) and De Andre Thomas (39th) gave the hosts a 2-0 first-half lead, and although Orlando McBayne netted from the spot in added time, it was a little too late for the dominant Montego Bay United team, who, based on yesterday's play, would have felt hard done by with the result.

"This is our first win here, and we are very pleased because normally, we play good and lose, but today, we won, so we can smile today," Cohen said. "This is a very good three points. Three very influential points because we have been playing well but haven't been scoring. Today, we scored two goals and defended stoutly and got the points."

Montego Bay United controlled the game despite the enthusiastic efforts of the promoted team, who spent much of the game sitting back and looking to capitalise on any given space on the break.

The westerners' influence fell short of their hosts' patience and resilience and it was the St Catherine-based Dunbeholden, who found themselves on the scoresheet first on the half-hour mark, when Thomas set up Dubidad, shocking the former champions.

Before MoBay could settle back into the rhythm of the game, Dubidad returned the favour to set up his strike partner, Thomas, who put them 2-0 up five minutes before the interval.

After the break, Montego Bay, led by a confident Jourdaine Fletcher, launched relentless attacks at the Dunbeholden goal, but the hosts showed grit and must be given credit for their determined defending, as they did all they could to protect their advantage.

In added time, Montego Bay eventually got a break when they were awarded a penalty, following a foul in the area and McBayne calmly slotted home on a second attempt after the referee had called back his first effort.

"Today, it was a team performance. We have been working on this from week, telling our two strikers that they have to combine more, and they came out today and had some good combinations and both of them assisted each other and scored. But in the second half, the team (MoBay) came out running more, but we sat back and protected what we have," Cohen added.