Rally around the Girlz - Grange: We want to generate support for the women's team 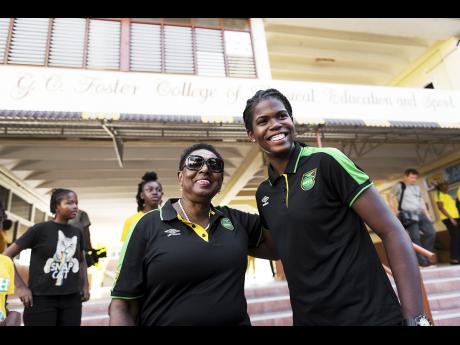 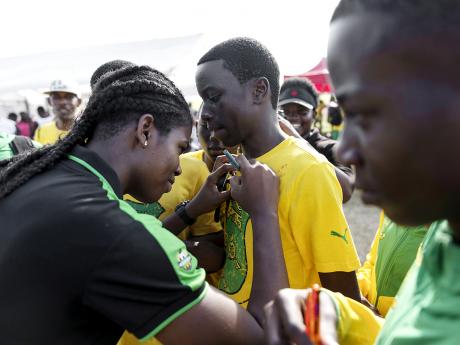 Gladstone Taylor
Reggae Girlz forward Khadija Shaw signs the shirt of a St Jago High student athlete at GC Foster College of Physical Education and Sport yesterday. GC Foster was one of the stops during the Reggae Girlz motorcade yesterday as the national women's football squad began a four-day series of events to celebrate qualification for the 2019 FIFA Women's World Cup in France. 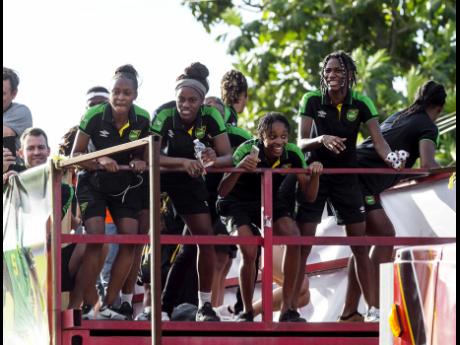 Gladstone Taylor
Members of the Reggae Girlz squad ride atop a truck during a motorcade yesterday to celebrate their qualification for the FIFA Women's World Cup in France.
1
2
3

Moments after she was blanketed by a group of athletes from her alma mater, St Jago High, which took a break from a track meet at G.C. Foster College to greet the Reggae Girlz yesterday, Khadija 'Bunny' Shaw flashed back to her playing days at the Spanish Town-based school.

The 21-year-old, who, along with her teammates, paused at the sports college from a motorcade to celebrate their historic qualification to the FIFA Women's World Cup in France next year, believes it was the innocent playing days at St Jago that developed a competitive spirit inside her that has now led her and Jamaica to the pinnacle of the women's game.

"When I was playing at St Jago, I never had any great aspirations. It was just fun and excitement, but it made me very competitive, and it is that competitiveness that I am thriving on now," the University of Tennessee senior shared. "It enabled me to play for Jamaica, and that is when I started to take it seriously."

She continued: "When I got to the national team, I realised that I could get something from this if I just worked hard. And because I worked hard, I am here now."

And now that Shaw and the rest of the Reggae Girlz are on the brink of playing on women's football greatest stage, she hopes that the boys and girls who left their homes to wave at the motorcade will be inspired by the moment.

"They are celebrating with a team that qualified for the World Cup, and I am pretty sure that they can say, I want to be like those girls. I want to practise to be like them so it goes a long way," Shaw said.

Minister of Sport, Olivia Grange told The Sunday Gleaner that one of the purposes of the motorcade was to galvanise support for the Girlz.

"We want to generate support for the Girlz. I think it is important for Jamaica to rally around the Girlz and show them love and embrace them because they are going to need our support to prepare for France and to perform well when they get there," she said. "Some of these girls were not born here, and it is also a chance to introduce them to Jamaica."

Head coach Hue Menzies, also praised the idea of the celebration as he thinks it could help to garner sponsorship for the team who he has to prepare to take on Brazil, Italy, and Australia in the group stage of the tournament.

"We want to really get Jamaica behind us because we are going to need it. Corporate Jamaica is important now because we have to prepare for the World Cup. We are in the process of finalising the schedule of games leading up to the tournament, and we want to play some of those games in Jamaica, so we are going to need sponsorship for those games to happen," Menzies said.

The four-day celebration continues today with a thanksgiving concert, which will be the open to the public, at Emancipation Park in New Kingston.