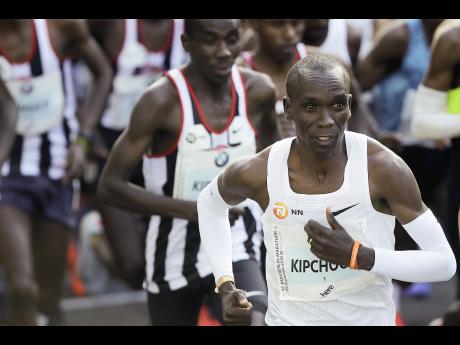 Eliud Kipchoge really is the male track and field athlete of the year. That was confirmed when the respected British journal Athletics Weekly named the Kenyan marathon maestro as its Readers Choice International Athlete of the Year. That followed similar awards by Track and Field News and the International Association of Athletics Federations (IAAF).

Opinion, however, appears divided about who the top woman of 2018 should be as Athletics Weekly readers voted for Britain's double European sprint winner Dina Asher-Smith.

Kipchoge added the marathon world record to his 2016 Olympic title with a super run of two hours 1 minute and 39 seconds in the Berlin Marathon. That was the Kenyan's second marathon win of the year as he had already won in London.

The Athletics Weekly decision gave Kipchoge a hat-trick of the sport's most highly regarded awards. However, when readers voted for Asher-Smith, their choice differed from those made elsewhere as the IAAF had selected Colombian triple jumper Caterine Ibarguen and Track and Field News had bestowed that honour on South African 800 metres star Caster Semenya. The speedy Briton stormed to her European double in world-leading times - 10.85 seconds in the 100 and 21.89 seconds in the 200.

Bahamian 200-400m star Shaunae Miller-Uibo and Belgian multievent luminary Nafissatou Thiam were second and third in the eyes of the Athletics Weekly readers. The three awards are selected with different methodology. While readers make the choices for Athletics Weekly, an international member panel of 31 experts does the evaluation for Track and Field News. The IAAF utilises votes from the public, the IAAF Family and the IAAF Council.